You are here: Home1 / Hate Crime 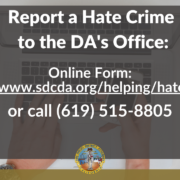 Noting a rise in hate crime prosecutions and declaring that such crimes won’t be tolerated, San Diego County District Attorney Summer Stephan today announced her office is charging the 16-year old who stabbed another teenager in the back with one count of attempt murder, and one count of assault with a deadly weapon. Both counts carry hate crime special allegations, as well as personal use of a deadly weapon and personal infliction of great bodily injuries special allegations. Accountability in juvenile court is focused on rehabilitation and is handled differently than in adult court, and includes a range of sentencing options that the court can consider.

In court today, prosecutors put no facts on the record in court today. Juvenile proceedings are confidential, and the DA is limited on what information can be released publicly. The investigation into the incident and the potential criminal acts by other individuals involved is ongoing and additional charges could be filed in the pending criminal case. DA Victim Advocates are working to support the victim’s family and ensure their safety in the aftermath of the stabbing and initial stages of the criminal prosecution.

“Multiple aspects of this incident are appalling and as our investigation moves forward, we will be sure to hold everyone accountable for whom the evidence shows committed a crime,” said DA Stephan. “We’ve seen a disturbing increase in hate crimes, with the highest number being committed against persons who are Black. Anyone who commits these crimes will be held accountable under the law and I join the community in their outrage regarding such incidents. Our office is dedicated to not only prosecuting hate crimes and holding perpetrators accountable under the law. We also educate the public on what constitutes such a crime and how to prevent them while also delivering the message that they won’t be tolerated.”

Prosecuting hate crimes is a priority for the San Diego County District Attorney’s Office. The DA has nearly tripled the number of hate crime cases it has prosecuted in recent years, filing 21 cases in 2020 and 30 such cases in 2021.

In 2020, in response to reports of hate-related incidents aimed at the Asian community across the nation in the wake of the COVID-19 pandemic, the District Attorney’s Office announced a new online form and hotline where the public can report suspected hate incidents and hate crimes they’ve been a victim or witness to in San Diego County. The online reporting form can be found on the District Attorney’s website here. The Hate Crimes Hotline number is 619-515-8805. Individuals submitting information about a suspected hate crime will be contacted with information about the DA’s review of the report and any action that may be taken.

The public is reminded that hate speech in and of itself often does not rise to the level of a hate crime but is relevant as it could escalate to criminal behavior Hate crimes are often preceded by hate speech. By law, a hate crime is a criminal act committed against another person that is motivated by prejudice against that person’s race, ethnicity, religion, sexual orientation, gender identity or disability.

Today, the court set a readiness hearing in the case for June 6 at 8:30 a.m. in Department 6 of the Juvenile Court.