You are here: Home1 / News2 / Seven Prosecutors Recognized for Outstanding Service to Victims 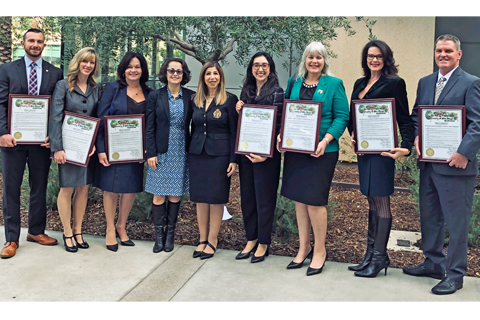 When victims of crime and their families are in their worst moments, they cling the hope they will one day obtain justice for the violence and sometimes unspeakable acts committed against them or their loved ones. Seven prosecutors in the District Attorney’s office were recognized today by the San Diego Board of Supervisors today for outstanding service on behalf of victims.[TWEET THIS]

The attorneys were selected by the San Diego Deputy District Attorneys Association after receiving nominations from their peers. Those recognized have demonstrated excellence in cases of significant impact and have made extraordinary contributions to public safety in San Diego County.

“The Deputy District Attorneys who were honored today have gone above the call of duty in pursuing justice with passion and integrity,” DA Summer Stephan said. “These DDAs have battled against violence and corruption alongside the DA team and their work exemplifies the excellence at every level of the District Attorney’s Office.”

The Board of Supervisors recognized the following Deputy DAs:

Sophia Roach prosecuted Donte Haddock and Anthony Frank for the murders of Darris Walker and Xusha Brown. Deputy DA Roach and her team examined and investigated every aspect of these murders for more than four years. The nine-week trial featured 100 witnesses, 600 exhibits, and dozens of recorded conversations. After four days of deliberations, jurors returned guilty verdicts: Haddock and Frank face life in prison without parole. DDA Sophia Roach combined expert skills of leading an investigation with trying and winning the challenging case built. Her performance was extraordinary.

Laurie Hauf tried two complicated murder cases all within the span of one year. In September 2018, Hauf tried a gang murder case in which the victim, Catherine Kennedy, was shot on her way home from church. After the jury found the defendant guilty and sentenced him to life in prison, DDA Hauf collaborated with the victim’s friends to create a gang intervention program. Following that case, DDA Hauf tried a high-ranking gang member who had threatened to kill the victim. The defendant attempted to use his influence to prevent witnesses from testifying but the jury found him guilty nonetheless. He now faces life in prison. DDA Hauf also successfully prosecuted a violent gang member who robbed a teenager and, on a separate occasion, stabbed another man in the chest. Within the same month, Laurie Hauf also tried another case in which a young man was stabbed to death. Over the past year, DDA Hauf has spent nearly two months in trial, questioned over 100 witnesses, and addressed a multitude of complex legal and factual issues. In addition to this heavy trial load, DDA Hauf trained prosecutors on Three Strikes Felony Sentencing and Trial Advocacy and chaired the San Diego County Board of Supervisors, North County Gang Commission.

John Philpott prosecuted a multi-million-dollar life insurance provider fraud ring, “Operation Backlash,” which began as a collaborative investigation by the San Diego District Attorney’s Office, the FBI, and the California Department of Insurance. The initial undercover operation included 35 workers’ compensation carriers, 180 patients, and suspects who billed the workers’ compensation system $580 million from 2013 to 2015. There were 171 search warrants and federal subpoenas issued, which generated over one million pages of discovery. In late 2015, DDA Philpott and his team presented cases to the grand jury and indicted 41 defendants, in the largest workers’ compensation fraud scheme ever uncovered in San Diego.

Oscar Hagstrom has tried more than 40 felony jury trials since he began his career at the San Diego DA’s Office. He has distinguished himself through his professionalism, work ethic, diligence, and performance in the court room. In one noteworthy case, DDA Hagstrom prosecuted a man for shooting at SWAT officers. The case first required a long and complex mental health diversion hearing. In the end, DDA Hagstrom secured guilty and sane verdicts and obtained a 33-year prison sentence for the defendant. In another noteworthy case, DDA Hagstrom prosecuted a defendant who stabbed and killed another man. During the trial, the defendant argued self-defense, calling numerous character witnesses who talked about the victim’s violent history. In the end, DDA Hagstrom demonstrated an ability to handle challenging cases and the defendant was sentenced to 12 years state prison.

In 2016, a war veteran was enjoying pizza in the Gaslamp District when he witnessed a man and seven of his friends challenging another group to a fight. The veteran intervened and tried to stop the fight, but the man and his friends instead assaulted him. He suffered many life-threatening complications while hospitalized and his will to live was almost nonexistent. DDA Abigail Dillon spent many hours trying to identify the primary perpetrator from a grainy surveillance video and locate potential witnesses. Despite obstacles, DDA Dillon spent hours building rapport with the victim to convince him to testify. . The jury found the defendant guilty and DDA Dillon obtained justice for a good Samaritan who remains paralyzed from the neck down for the rest of his life.

For more than 30 years in the District Attorney’s Office, Deputy DA Valerie Summers has tried some of the most serious and violent cases and has risen through the ranks of outstanding prosecutors. She has managed a variety of units and has demonstrated her exceptional knowledge, versatility, and judgment. DDA Summers began her legal career as a law clerk in the DA’s Juvenile Branch in 1987. From the time she got hired as a new Deputy DA, she has been a rising star. DDA Summers was the first gang prosecutor in the then brand-new unit in North County, handling many complex gang cases. She served as a team leader in Vista, as the Assistant Chief of the Gangs Unit, Chief of Sex Crimes and Chief of the Family Protection Division. She was a statewide legal scholar, instructor and teacher in the area of sentencing. Serving as an adjunct professor at UCSD for over a decade, she has taught undergraduate students in sociology, criminology, and criminal procedure. DDA Summers leads by example, by her experience, and success in high-level trials, her work ethic, and her constant striving to be the most prepared in a meeting or in court.

In March 2019, the California Legislature signed into law Senate Bill 1437, changing the definition of malice as used in the law of murder. DDA Bannon has been the lead attorney for all SB1437 litigation in the San Diego District Attorney’s Office and manages petitions related to the bill. DDA Bannon has also trained DDAs on how to handle SB1437 petitions. Other counties have successfully argued to their courts that this law is unconstitutional based on DDA Bannon’s work. DDA Bannon excels as both a formidable trial lawyer and appellate litigator. Her contributions to both the San Diego DA’s Office and prosecutor’s statewide are worthy of the highest recognition. [TWEET THIS]