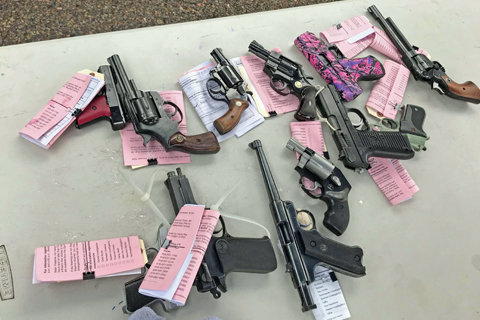 Eleven years ago, Monique Palmer, 17, and Michael Taylor, 15, were violently gunned down as they were walking home from a house party in Valencia Park. This is the type of tragedy the annual gun exchange program aims to prevent.

This year, the event was held on December 7 at the Encanto Southern Baptist Church in Southeastern San Diego. Participants turned in 261 guns and received skateboards or gift cards in the amount of $100 for handguns, rifles and shotguns or $200 for assault weapons.[TWEET THIS]

“Removing unwanted guns from the streets reduces the likelihood that they will be stolen and used to commit a crime or hurt someone,” District Attorney Summer Stephan said. “UAAMAC and local law enforcement have been partnering for 10 years to provide a safe method of disposing of unwanted guns in San Diego and the District Attorney’s Office is proud to help with funding for the program.”

In addition to taking unwanted guns out of commission, the annual gun exchange provides financial assistance through gift cards.

“UAAMAC has continued a very successful partnership with the DA’s Office, the Sheriff’s Department, the San Diego Police Department, and the San Diego Training Center to promote peace and safety for all of San Diegans,” said Reverend Gerald Brown, from UAAMAC and Executive Director for the Citizens Advisory Board on Police and Community Relations in the City of San Diego. “Working collaboratively, we have collected over 2,000 guns, assault weapons and ammunition. Most importantly, we vow to remember all who have lost their lives to senseless gun violence. Monique Palmer and Michael Taylor will live eternally in our actions, hearts, and minds.”

The gun exchange program has received about 300 weapons during each event over the last 10 years, collecting more than 2,500 weapons to date. [TWEET THIS]