You are here: Home1 / News2 / Innovative Work Leads to Prestigious Award for Elder Abuse Prosecutor and... 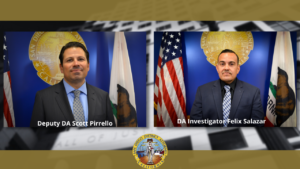 Deputy DA Pirrello and DA Investigator Salazar developed an innovative vision for solving complex elder scams that ultimately prompted the development of a task force capable of tracking down and holding accountable those responsible for scamming elders out of billions of dollars. The task force is the culmination of years of work and the beginning of a new era in attacking crime syndicates that prey on the elderly.

Every year, San Diego senior citizens are scammed out of tens of millions of dollars, which happens through phony scenarios that often involve a loved one, such as a grandson or granddaughter needing urgent help or scammers posing as government agencies such as the IRS or Social Security Administration calling to demand money.

Without knowing it, seniors are sending their hard-earned retirement money to international scam syndicates. For years, these criminals operated across the U.S. and out of the country. They were hard to pin down because they committed their crimes in so many different jurisdictions and there was no way to connect the dots.

But thanks to the Elder Justice Task Force, announced last month, the District Attorney’s Office and its law enforcement partners have begun systematically dismantling these scam syndicates using data-driven investigative techniques. The Task Force shares key information, including databases, and actively works to connect dots and reveal patterns that allow us to zero in on criminals and arrest them.

When setting out to connect the dots in elder scam cases, Pirrello and Salazar spent two years following a money trail of elder victims. During that time, DAI Salazar wrote and submitted more than 200 search warrants to follow the money from elder victim bank accounts. He discovered that the billions of dollars in losses were not going directly from elder victims to overseas accounts. Instead, he found a billion-dollar underground economy in the U.S. full of money launderers willing to transfer large sums of money multiple times to facilitate the transnational criminal organizations getting their money.

Now, with the unprecedented power of the unified collaboration and data sharing between the District Attorney’s Office with the U.S. Attorney and FBI, law enforcement is more prepared than ever to take down these rings through the Elder Justice Task Force.

Last year, the San Diego County District Attorney’s office focused on bringing down an active ring that began preying on San Diego elders. The bait was the same: a call to a grandparent from someone posing as their grandchild in peril in another country. Before the seniors could process the information, the fake grandchild was replaced on the phone with someone claiming to be an attorney demanding bail money for the grandchild or they could face dire harm.

A courier, supposedly from a bail bond agency, was sent to the grandparent’s home to collect large sums of cash. The suspect – an Orange County resident – was identified through Ring Doorbell video. She eventually pleaded guilty to nine felony counts including residential robbery, theft from an elder, money laundering and receiving stolen property. She was sentenced to four years in state prison in June, a sentence that would not have been imaginable just years ago.

“Elder abuse is one of the most underreported crimes, often because of the embarrassment and shame felt by victims,” DA Stephan said. “Our goal is for the Elder Justice Task Force to become an example for the rest of the nation on how to stop the billion-dollar criminal industry of elder fraud.”

Inspired by her Community