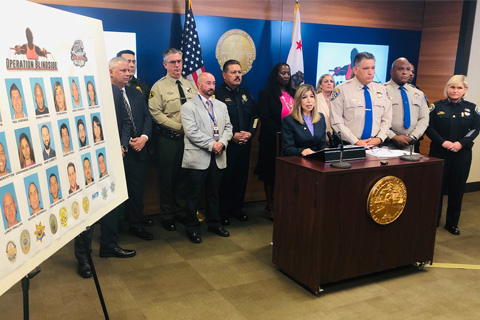 When you think of auto theft, you might think of vehicles being hot-wired and stolen off the street, brought into ‘chop shops’ and sold for parts. But beginning in December 2017, investigators with the San Diego Regional Auto Theft Task Force (RATT) began looking into a massive auto theft scheme of a different kind. The investigation revealed that the defendants fraudulently purchased vehicles, laundered money, set up fake companies and scammed banks to get away with millions of dollars, making it one of the biggest auto theft-related cases in recent memory in San Diego.

San Diego County District Attorney Summer Stephan today joined RATT Commander, California Highway Patrol Captain, James Portilla, to announce that 21 defendants have been charged as a result of ‘Operation Blindside,’ an investigation led by RATT and supported by its law enforcement partners. Investigators followed a trail of multiple financial schemes that ultimately led to the identification of over 100 vehicles obtained through fraudulent means.

During the investigation several other methods of defrauding vehicle finance companies, financial institutions and payment processing companies were discovered.  Investigators learned that 21 defendants formed 54 shell companies and opened in excess of 45 bank accounts at various financial institutions to facilitate the fraudulent scheme and launder money. The total amount of fraud exceeds $5 million.

“This criminal enterprise involved a network of individuals and dozens of shell companies that allowed the ringleader to pull the strings and carry out this scam for over 3 years,” said District Attorney Stephan. “Banks, vehicle finance companies —and ultimately the consumer—are all victims of this aggressive organized criminal operation.”

The San Diego County District Attorney’s Office charged 21 defendants with more than 275 felony violations relating to their fraudulent conduct. Law enforcement made arrests and executed multiple search warrants across San Diego, Riverside and San Bernardino Counties last week. The defendants face various felony charges including money laundering, auto theft, grand theft and theft by false pretense. Thirteen of the suspects that have been arrested as part of Operation Blindside have been arraigned. One additional defendant is scheduled to be arraigned today at 1:30 p.m. in San Diego Superior Court and another defendant is in custody in Washington state. There are outstanding arrest warrants for the remaining six defendants.

During Operation Blindside, more than 100 vehicles were identified, of which 75 vehicles became the primary focus of the vehicle fraud investigation.  The estimated value of those vehicles is approximately $3.75 million dollars. The vehicles included high-end luxury vehicles, motorhomes, recreational vehicles and water crafts.

“As newer vehicles become equipped with effective anti-theft technologies, traditional methods of stealing vehicles are not as effective,” said RATT Commander James Portilla, “As a result, we have seen an increase in vehicle theft using a variety of fraud schemes.”

Defendant Bryan Orr, 34, was the ringleader of the elaborate scheme involving a network of co-conspirators.

In one scam, a straw buyer would purchase and finance a new vehicle. Thereafter, the auto loan would be paid in full by other co-conspirators.  Once the title to the vehicle was sent to the purchaser, the vehicle would be immediately re-sold. Once the sale proceeds were secured, the individuals who made the payments would falsely report the fraudulent use of their bank accounts, leading financial institutions to refund the payments that had been made on the vehicles. Immediately the funds were withdrawn and passed on to Orr. For their effort, the co-conspirators received a percentage.

Another fraudulent scheme involved the purchase or return of “merchandise” between the various shell companies. Once the seller withdrew the proceeds from the transaction, the buyer would dispute the purchase and receive a provisional credit from the bank. Similar to the vehicle purchase scheme, upon receipt of the refund, the funds would be withdrawn immediately or used to make fraudulent purchases with other “shell companies.” Orr used the shell companies to steal in excess of $2.5 million from banks during this time period.

One defendant created false financial documentation that enabled the purchase of vehicles by individuals with little to no income. Multiple Defendants were also involved in the sale and purchase “trade-lines.” The inflated credit rating creates a false sense of credit worthiness for lenders. Vehicle loans, credit cards and business lines of credit have been issued to several Defendants so that Orr could continue to defraud.

To create the appearance of legitimacy, fake websites were created for the various “shell companies.” The websites were researched by the financial institutions seeking to verify its customers’ employment or the existence of the business when reviewing request for refunds relating to disputed purchases.

If convicted, Bryan Orr faces over 100 years in prison.

According to CHP statistics, last year 10,213 vehicles were stolen in San Diego County, a 2.8% reduction from the year before.  From January through May 2019, 4,083 vehicles were reported stolen.

Settlement Reached with AutoZone for Illegal Disposal of Hazardous Waste

How to Recognize Animal Cruelty
Scroll to top