You are here: Home1 / Larry Millete 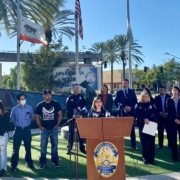 San Diego County District Attorney Summer Stephan announced today that her office has filed a murder charge against Larry Millete, 40, the husband of May “Maya” Millete, 40, a Chula Vista, California mother of three who has been missing since January. In addition to the murder charge, Millete is also charged with illegal possession of an assault weapon. If convicted, he faces life in state prison.

Millete was arrested today by the Chula Vista Police Department. Following Millete’s arrest, he was booked into a San Diego County Jail and is being held without bail. He is scheduled to be arraigned on Thursday at 1:30 in the South Bay Courthouse located in Chula Vista.

“Whenever one of our community goes missing, we hope for their safe return,” DA Stephan said. “Sometimes missing persons cases remain unsolved, but as the evidence unfolded in this case, it pointed in one direction— that May was murdered. As we make this announcement, I know the hearts of the community are with May’s family, her three young children, and everyone who knew and loved her.”

California law allows prosecutors to file murder charges even though May’s body has not been found. Specifically, case law holds that successfully disposing of a victim’s body does not entitle a murderer to avoid prosecution.

The District Attorney’s Office filed this case based on evidence that was developed during a nine-month investigation based on the collaboration of the Chula Vista Police Department, which led the investigation and a dedicated team from the DA’s Office along with support from the FBI and NCIS.

In San Diego County, there is an average of 13 domestic violence-related homicides each year. These types of murders make up 14 % of all homicides in the county.

If you or someone you know is being abused by a current or former partner, call the National
Domestic Violence Hotline (1-800-799-7233) for confidential support and assistance.