You are here: Home1 / boys who become victims of human trafficking

Tag Archive for: boys who become victims of human trafficking 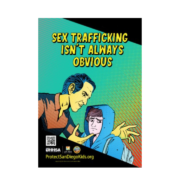 San Diego County District Attorney Summer Stephan and Health and Human Services Director Nick Macchione today announced an outreach campaign running in January aimed at raising awareness about boys who become victims of human trafficking. In the past, the focus has often been on girls who were being trafficked, but in recent years law enforcement has been working to educate the public that boys are also often victims. The month-long campaign’s goal is to broaden the public perception of who is vulnerable to being sexually trafficked. Officials hope that bringing attention to this issue will improve screening, identification, and services for boys who are victims of sex trafficking. The campaign will appear on billboards, bus transit posters, on social media and in public service announcements on radio. January is Human Trafficking Awareness month.

“We must recognize the reality that the trafficking of boys is more common than the public may realize,” said DA Stephan. “We have a responsibility to protect all children who are being trafficked. This outreach is an extension of our work to increase awareness, improve identification and reporting, and develop specialty services for survivors who are boys.”

While state and local data doesn’t provide good statistics about the trafficking of boys, national studies demonstrate the seriousness of the problem. A study by the John Jay College of Criminal Justice estimated that as many as 50% of the commercially sexually exploited children in the United States are boys. In 2013, a study found that the commercial sexual exploitation of boys is vastly under reported.

“Tragically, as many as 50% of sexually trafficked children are boys and LGBTQ+ youth are more likely to experience sexual violence,” said Nick Macchione, Director of the County of San Diego Health and Human Services Agency. “It’s extremely important that we understand the gravity of the issue and take immediate action by raising awareness through this campaign with the support of our district attorney. At the Health and Human Services Agency, we will promote these valuable and lifesaving resources countywide with all of our community partners.  Together, we will help protect our vulnerable children and youth from sexual exploitation.”

The campaign is being organized by the District Attorney’s Office, Health and Human Services Agency (HHSA), and Child Welfare Services. The artwork for the campaign was produced by anti-trafficking activist Genice Jacobs with artist Myriam Obin. A web page, www.ProtectSanDiegoKids.org provides information and resources.

Visit www.ProtectSanDiegoKids.org for more information. For help for you or someone you love, call 800-344-6000 to reach caring, trained staff who can help.