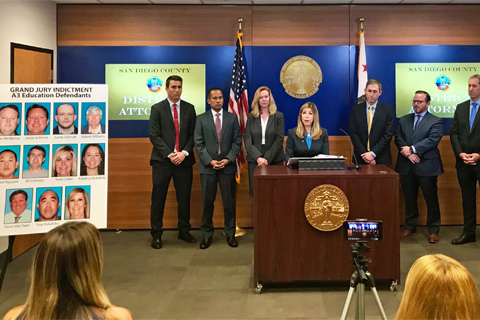 An Australian national, who is a charter school operator in the U.S., and his Long Beach business partner, conspired to siphon more than $50 million from the State of California for years according to a grand jury indictment. As part of a wide-ranging scheme, the defendants sought out small school districts with limited experience in oversight and proposed they authorize online charter schools to earn additional public funds in the form of oversight fees. Sean McManus, 46, and Jason Schrock, 44, the CEO and president of A3 Education, along with nine other defendants have been indicted in San Diego County on a several criminal counts including conspiracy, misappropriation of public funds, paying for student information and conflict of interest. [TWEET THIS]

The 235-page indictment, which was handed down by a grand jury on May 17, is the result of a year-long investigation by the San Diego County District Attorney’s Office into allegations of fraud in public schools. The grand jury spent six weeks hearing testimony from more than 70 witnesses including employees of the charter school, various school districts, and county and state-level employees. The investigation uncovered a massive scheme in which McManus and Schrock directed subordinates and co-defendants to open 19 charter schools in San Diego County and across California. These are collectively called “A3 Charter Schools” and include:

“These defendants engaged in a devious, systematic public corruption scheme on the backs of students, their parents and the public that over time diverted millions of taxpayer dollars into their own pockets,” District Attorney Summer Stephan said. “Our team of investigators and prosecutors uncovered widespread misappropriation of public funds that extends across the state.”

Co-defendants, who worked under McManus and Schrock at various charter schools, purposely did not disclose their relationship with the men when starting charter schools and falsely claimed to be the leaders of the schools. McManus is charged with 64 counts and is facing more than 40 years in state prison if convicted. Schrock is charged with 62 counts and is also facing more than 40 years in custody.

In addition to creating charter schools, McManus and Schrock ran another scam that paid athletic organizations for student information. A3 Charter Schools paid pre-existing youth programs as little as $25 per student for enrollment documentation and would then ‘enroll’ the students into a charter school in the summer time as regular students, collecting about $2,000 per student from the State of California. Some students and parents were unaware of enrollment in a charter school.

In other instances, McManus would direct co-defendants or their employees to backdate student enrollment information in order to receive additional funding. The state pays school districts based on ‘average daily attendance’ (ADA) and the defendants used their knowledge of how the state doles out funding to collect as much money as possible. For example, McManus and Schrock dual enrolled students from private schools into their charter schools. In exchange for enrollment documentation, McManus and Schrock would pay private schools a fraction of the state pays in ADA and pocket the rest – anywhere from $2,000 to $5,000 per child.

Additionally, the organization would collect more than one ADA in state funding per student by transferring students from one school to another without parental consent or knowledge – a scheme that allowed McManus and Schrock to collect more than funding than they were entitled.

Once McManus and Schrock obtained the public funds in private company bank accounts, they did not use the money to educate students, but instead spent the funds on themselves and their families.  McManus and Schrock invested in startup companies, real estate, and wired funds directly to themselves or family members. The majority of funds paid to A3 Education, A3 Consulting, Global Consulting Services, and Mad Dog Marketing ended up in the pockets of McManus and Schrock.

Co-defendant, Steve Van Zant, 56, created EdCBO to exclusively provide back office services for A3 Charter Schools. Van Zant intentionally hid his involvement with EdCBO and McManus by filing all corporate paperwork under the name of a subordinate.