You are here: Home1 / News2 / With Schools Closed, Children More Susceptible to Exploitation 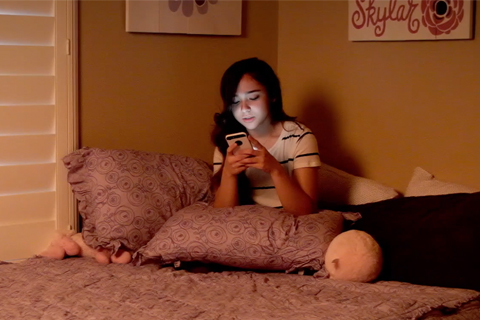 Now that school campuses have been closed since mid-March in response to the COVID-19 pandemic, law enforcement officials and human trafficking watchdog groups are concerned students are more susceptible than ever to sexual exploitation because teachers and school staff aren’t able to make the same observations as they would in person. Educators often act as law enforcement’s eyes and ears, noticing some of the telltale signs that a student is being groomed or sexually exploited by a trafficker. [TWEET THIS]

The San Diego Trafficking Prevention Collective, which was formed last year, is now providing online training to teachers in order to continue their mission of bringing human trafficking education, prevention and awareness training into every public school in San Diego County.

“Just because kids are not physically in schools, does not mean they aren’t at risk of being recruited into the dangerous world of human trafficking,” District Attorney Summer Stephan said. “Now that students are all spending more time online, they are a captive audience for would-be traffickers making contact on social media, which means we have to expand our efforts to educate them to prevent them from falling victim to predators.” [TWEET THIS]

Reports of technology-based exploitation have tripled to the National Center for Missing and Exploited Children amid the COVID-19 pandemic.

The Collective has responded to this increased danger by educating students, parents and teachers through virtual Teacher Academies, live presentations and self-paced web platforms. While teachers have less access to supervising students the Collective provides additional parent and community resources to equip families in their home environment. It has also increased online trainings for teachers and specifically as it relates to online safety in collaboration with Child Welfare Services.

The San Diego Human Trafficking Task Force is seeing an increase in the number of cases involving juvenile victims since the COVID-19 emergency started. In the majority of these cases, they have found evidence of the trafficker recruiting and grooming the victim over social media.

“Social media is the number one recruiting method for traffickers,” said Geanie Franco, Commander for the San Diego Human Trafficking Task Force. “Parents should know what sites their children visit and talk to them about the ways strangers could try to entice children online.”

In the year since it launched, the Trafficking Prevention Collective group has trained 6,073 teachers in 280 schools and has interacted with more than 12,000 students. The San Diego Trafficking Prevention Collective is a multistage educational program that combines early childhood education, participatory theater, and classroom-based curriculum to decrease the number of children involved in human trafficking within San Diego County. The Collective’s website has been enriched with more robust content that brings awareness to the fact that nearly all high schools have reported cases of human trafficking.

“We were on a good trajectory of training teachers and students when the pandemic suddenly brought classes to a standstill, so we had to look at other ways to get the word out,” said Catherine Hanna Schrock, program and artistic director for kNOw MORE, a drama-based interactive training for students and families.

When it launched last year, the Collective obtained a four-year grant to fund the critical training, helping school districts comply with a law passed in 2017 requiring schools to provide a human trafficking curriculum. This first-of-its-kind partnership between the District Attorney’s Office and the private sector brought three unique programs to schools under the Collective’s umbrella: PROTECT, Project ROOTS, and kNOw MORE.

The grant has been funded by the UBS Optimus Foundation and several of its donors, which identified San Diego as a region with opportunities to augment its approach to human trafficking prevention and education.

San Diego is on the FBI’s list of top 13 cities for trafficking children. Human trafficking and research estimates that San Diego has an underground sex economy worth $810 million a year. Victims can be anyone – women, men, children, U.S. citizens or foreign nationals. However, in the area of sex trafficking, minors are particularly vulnerable targets. Social media is an easy way for traffickers to access and exploit children. The public can follow the Collective at @sandiegotpc on Twitter, Facebook and Instagram. [TWEET THIS]

PROTECT (PRevention Organized to Educate Children on Trafficking) – a 3 Strands Global Foundation program – is a holistic classroom education program that provides teachers and students with a comprehensive understanding of the dangers and signs of human trafficking and exploitation. Online or in-person staff training, instructional resources and curriculum are available to teachers in elementary, middle and high school. PROTECT helps teachers identify vulnerable students and connect them to the appropriate resources.

Project ROOTS – a PCI program – is an after-school program that addresses the root causes of gender-based violence, exploitation, and unhealthy relationships through group mentoring and social emotional learning. Project ROOTS has adapted several activities that parents can do at home with their children, covering emotional well-being, online and social media safety, and practicing empathy.

kNOw MORE – a Point Loma Nazarene University-Center for Justice and Reconciliation program – is a student-centered human trafficking awareness and prevention curriculum for middle and high school students. The program provides a drama-based interactive training for students and their families. kNOw MORE has created a digital version of the popular drama-based and survivor-led program in which staff works with schools to craft a suitable program delivery plan that meets the needs of each school.