You are here: Home1 / News2 / Price Gouging is a Crime During State of Emergency 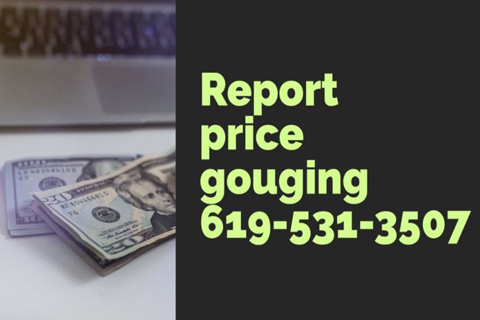 The wildfires throughout California and San Diego County have left many people without homes or required to evacuate their properties. In the wake of these wildfires, San Diego County District Attorney Summer Stephan today issued a warning to businesses and scammers not to take advantage of consumers by price gouging during a state of an emergency – doing so can end in prosecution. During a declared state of emergency, it is illegal for a business to increase its prices for essential goods or services by more than 10 percent, unless they can show their own costs have been increased. Gov. Edmund G. Brown declared the state of emergency on December 7. [INFO EN ESPAÑOL]

“Price gouging during a state of an emergency is not only a crime, it is re-victimizing victims who may have lost everything in a wildfire,” DA Summer Stephan said. “Natural disasters are already devastating, so when businesses and scammers exploit consumers when they are vulnerable, law enforcement will not tolerate it.”

It is against the law to spike prices on:

In addition, it is a misdemeanor for a hotel or motel to increase regular rates by more than 10 percent during a declared emergency and for the 30 days following the state of emergency.

During a state of emergency, looting is a felony (2nd degree burglary) with a penalty of up to three years in state prison.

Anyone should be extremely cautious if approached by aggressive agents, adjusters or contractors after a disaster. Most businesses are honest and have good intentions, but there are always bad actors waiting to take advantage of disaster victims. Working as an unlicensed contractor during a state of emergency is a felony. Keep these tips in mind when selecting a contractor:

In the aftermath of natural disasters, debris-clearing scams often surface. Do not provide payment upfront and be sure to ask where the debris is being taken. Scammers often ask for money up-front and then disappear. Sometimes they dump debris on a neighbor’s property or park, which may cause you to be responsible for the costs and penalties.

During a disaster we hear many pleas for donations but we have to beware of charity scams as well. Here are some important tips to keep in mind:

The District Attorney’s Office has historically played a role in incidents of wildfires, including the San Diego County wildfires of 2003, 2007 and 2014. During those events, investigators from the District Attorney’s Office, the California Department of Insurance, the Contractors State License Board, and the Department of Motor Vehicles fanned out over fire-ravaged areas to warn homeowners to beware of would-be criminals who prey on victims of natural disasters. They posted signs warning unlicensed contractors that operating in a declared state of emergency area is a felony.

You can report suspected price gouging to the District Attorney’s Consumer Protection Unit at (619) 531-3507, or: