You are here: Home1 / News2 / New Program Steers Low-Level Offenders Away from Convictions and Jail 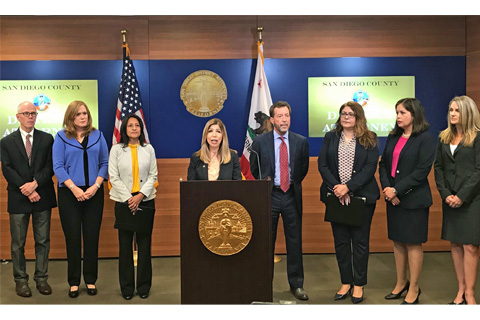 Getting a second chance is a powerful opportunity that can change the course of someone’s life. Nowhere is that truer than in the criminal justice system, which is why District Attorney Summer Stephan has set in motion a new program that’s providing those second chances for low-level, non-violent offenders in an effort to change lives, provide services and promote public safety. [TWEET THIS]

Under the DA’s Community Justice Initiative, instead of being prosecuted for the low-level crime, the District Attorney offers another option: agree to 12 hours of cognitive behavioral therapy and four hours of volunteer work in the community. After completing the program, the case is dismissed and the individual’s record is sealed. Only non-violent and non-sexual offenses qualify for the program. If someone is caught shoplifting small items, for example, and it is his or her first run-in with the law, that person would normally face a misdemeanor conviction, a fine and up to one year in jail. Under the CJI program, they’re diverted away from the system and given a chance to clear their record.

“This common-sense program holds people accountable for their actions, but steers them away from incarceration and onto a healthy path,” District Attorney Summer Stephan said. “It provides a second chance and ultimately builds safer communities.” 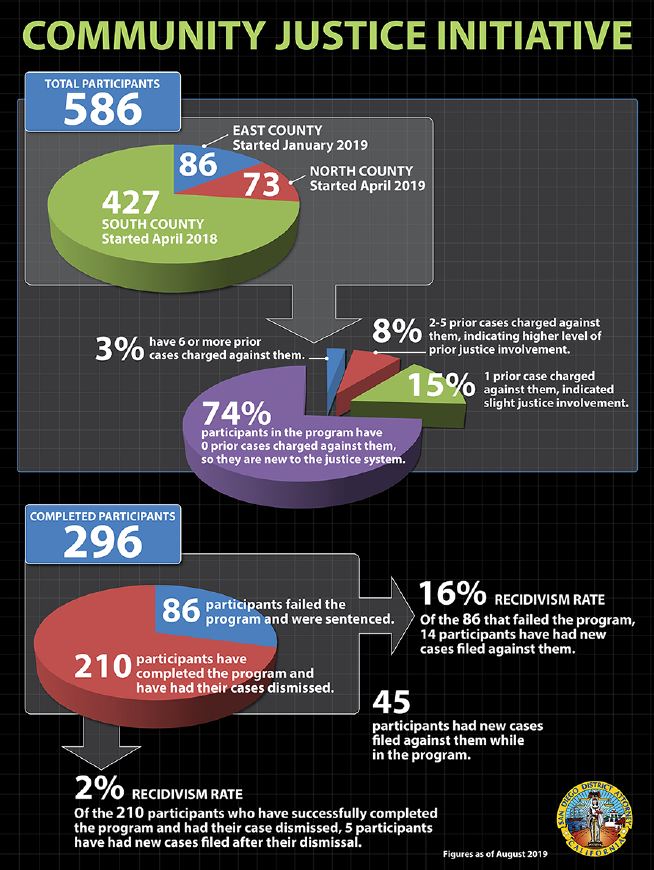 The most common offenses in the program, which has been in operation for one year, are cases such as shoplifting, non-DUI traffic offenses, or vandalism. Crimes that do not qualify include driving under the influence, sex offences, child and elder abuse or hate crimes.

Prosecutors offer the program at an individual’s first court appearance, generally at arraignment or the first readiness conference, if the person has not participated in the program before. If the program is accepted, the participant enters a guilty plea but is not sentenced immediately. Instead, a sentencing date is set for 150 days later.

Participants have 120 days to complete the program’s basic requirements and any additional obligations such as paying victim restitution. As part of the requirements, participants must attend cognitive behavioral therapy classes. The idea is to address to root cause of their crime and provide people with the tools and ability to make better choices, reducing the likelihood of returning to the criminal justice system.

If the conditions are met within 120 days, the case is dismissed (including the guilty plea) and there are no more court appearances. If participants have not fulfilled the obligations within 120 days, they must return to court on their sentencing date.

When developing the program, the District Attorney’s Office collaborated with its justice system partners including the Office of the San Diego County Public Defender, and other community stakeholders.

“The CJI process includes a cognitive behavioral therapy component, which helps our clients gain insight into underlying issues which may have led to their criminal behavior,” Public Defender Randy Mize said. “This therapy redirects such behaviors and has a proven track record of positive outcomes.  CJI recognizes that a wrong has been committed and holds offenders accountable without overly burdening their lives with a criminal conviction.”

The Community Justice Initiative has been designed to address criminal thinking through cognitive behavioral therapy.

The community also reaps benefits through the volunteer work that participants perform at any non-profit of their choice. And in cases where victim restitution is involved, participants agree to pay the restitution in whole, which means crime victims have a greater likelihood of being repaid more quickly.

The Community Justice Initiative is in line with an evolving approach to criminal justice system in a way that is responsible and still protects public safety. [TWEET THIS]

“Our goal is to keep people who have never been in the criminal justice system from starting down a criminal path,” DA Stephan said. “Petty crimes can eventually lead to more serious crimes and we want to interrupt that cycle by addressing the underlying causes sooner rather than later.”