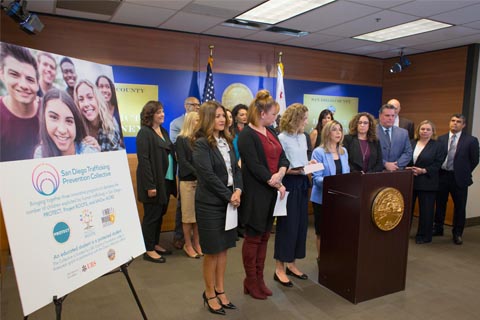 San Diego County District Attorney Summer Stephan  announced a coordinated trio of new programs that aims to bring human trafficking education, prevention and awareness training into every public school in San Diego County and protect children from exploitation under the umbrella of the newly-established San Diego Trafficking Prevention Collective. The announcement comes during national Human Trafficking Awareness Month and responds to FBI data showing San Diego ranks as one of the top 13 worst regions for human trafficking.[TWEET THIS]

The Collective obtained a three-year grant to fund the critical training, helping school districts comply with a law passed in 2017 requiring schools to provide a human trafficking curriculum. This first-of-its-kind public-private partnership will bring three unique programs to schools under the Collective’s umbrella: PROTECT, Project ROOTS, and kNOw MORE.

The Collective empowers students in elementary, middle and high school and teaches them about human trafficking in schools and neighborhoods, through a three pronged approach: in-school prevention education, after-school intervention, and interactive multimedia training.

The grant has been funded by the UBS Optimus Foundation, which identified San Diego as a region with opportunities to augment its approach to human trafficking prevention and education.

“Combatting human trafficking and protecting children from falling victim to this terrible form of modern-day slavery is one of my top public safety priorities,” DA Stephan said. “Human trafficking is the second largest criminal industry in the world in which traffickers profit by preying on unsuspecting children, luring them right out of their schools and homes with deception and lies. This first-of-its-kind human trafficking prevention education collective will arm our kids with the knowledge and tools they need to protect themselves and to engage with trusted adults to help them remain free of abuse and exploitation.”

[WATCH VIDEO OF THE ANNOUNCEMENT]

Recognizing the unfunded legislative mandate that schools must provide human trafficking education, DA Stephan worked to secure a public-private partnership to properly fund the curriculum and she coordinated with various San Diego County school districts to implement the three programs included in the Collective’s programming.

“UBS Optimus Foundation is proud to be a founding partner in this effort,” said Sally Faiz, Program Director of Child Protection for UBS Optimus Foundation. “Trafficking is a horror affecting over 400,000 people in the U.S. We see prevention as the most ‎desirable point to intervene, giving children the skills and knowledge they need to protect themselves from threat and keep safe. This collective, as a partnership of San Diego law enforcement, schools, philanthropists, business, universities and community nonprofits, builds a strong and resilient community. UBS is honored to be part of this group here in San Diego and to continue its active work supporting human-trafficking prevention across the U.S. and across the world.”

San Diego County ranks in the top three areas in the state for human trafficking and research estimates an underground sex economy worth $810 million a year. Victims can be anyone – women, men, children, U.S. citizens or foreign nationals. However, in the area of sex trafficking, minors are particularly vulnerable targets. Social media is one way traffickers access and exploit children.

“This investment allows the San Diego Unified School District to make sure our middle and high school teachers are fully informed and prepared for the fight against human trafficking,” said San Diego Unified School District Superintendent Cindy Marten. “We are deeply grateful to District Attorney Summer Stephan for supporting our efforts to keep students safe. Human trafficking is an issue San Diegans must confront together, and that is why we are proud to take part in this unique interagency effort being announced this morning.”

The ugly truth is that schools across San Diego County have confirmed that traffickers actively recruit children on or near school campuses and use social media to lure and manipulate victims. In fact, 90 percent of high schools studied in San Diego County identified cases of human trafficking involving students, according to a 2016 study done by Point Loma Nazarene University and the University of San Diego.

“We know that young people are especially vulnerable to commercial sexual exploitation and human trafficking, which means schools must play an important part in addressing it,” said San Diego County Superintendent of Schools Dr. Paul Gothold. “The San Diego County Office of Education is dedicated to supporting local school districts in prevention and intervention best practices to address the potential or actual victimization of our students. By taking a proactive approach to address the commercial sexual exploitation of children, we are more likely to reduce the incidents of human trafficking in our schools.”

“The San Diego Trafficking Prevention Collective and our schools are working toward reducing the vulnerability of children in our schools through trauma-informed education and training,” said Don Buchheit, the Regional Collective Director for San Diego. “Combating exploitation and protecting children takes an entire community. In San Diego, we are blessed to have our community working side by side under the leadership of the District Attorney’s Office. An educated child is a protected child.” [TWEET THIS]

New Chief Investigator is Sworn In