You are here: Home1 / News2 / Deputy DAs and Investigator Honored for Extraordinary Work 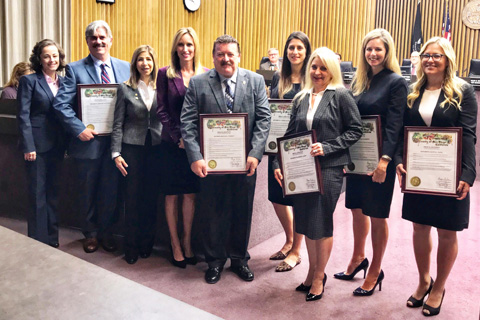 The San Diego County Board of Supervisors honored five prosecutors and an investigator from the District Attorney’s Office with proclamations recognizing their outstanding contributions to public safety over the past year. The awards were presented at Wednesday’s board meeting. The prosecutors were selected for the awards by the San Diego Deputy District Attorneys Association after being nominated by their peers for their extraordinary work. [TWEET THIS]

“I’m honored to work with and lead such outstanding Deputy District Attorneys and investigators who deliver justice every day on behalf of crime victims in San Diego County,” DA Summer Stephan said. “They truly represent the dedication and quality of our entire prosecutorial team.”

The Board of Supervisors honored the following DA employees:

David Bost, who has worked as a gang prosecutor for almost his entire career, prosecuted two gang members over the course of four murder trials in front of five juries. For more than 23 years, he pursued justice for the 1995 unsolved gang-related murder of 18-year-old Crystal Odom. The gang members’ target was Ms. Odom’s gang-affiliated boyfriend, Curtis Harvey. After three trials and almost 23 years after Skyline gang members shot and killed Ms. Odom, the jury convicted the killer of murder. In another murder case, gang member Christina Daniels attacked and stabbed Jasmine Ruiz to death inside of a car. After stabbing her, Daniels ran Ruiz over and left her pinned under the car where she bled to death. A jury convicted Daniels of murder.

Makenzie Harvey has tried nearly 50 felony jury trials during her tenure in the Superior Court Division of the District Attorney’s Office, including eight homicides. As a team leader, she has mentored many young prosecutors. In addition to her team leader assignment, Harvey is the crime lab liaison to law enforcement agencies. Most recently, she tried a homicide case in which a recently-retired school teacher was murdered by her son. The defendant stabbed his mother multiple times and used a Taser gun during the attack. He was convicted of first-degree murder.

Marnie Layon, a prosecutor in the Family Protection Division, handles some of the most difficult cases in the DA’s Office. In the last year, she successfully prosecuted several tragic cases that highlight her extraordinary skills. The cases involved murder, rape, domestic violence and child sexual abuse. She is the epitome of the professional, career prosecutor.

Jalyn Wang’s work in the last year has been extraordinary. One of her cases included a murder in which the defendant beat his cellmate to death. The case had significant legal issues, including a mental health-related defense. Wang’s cases also involve a series of home invasion robberies and residential burglaries. A true testament to her dedication to the victims in her cases is demonstrated by the cards, flowers, and expressions of gratitude she receives.

In just six years, Claudia Plascencia has distinguished herself as an outstanding prosecutor. A perfect example includes her prosecution of Salvador Sanchez in the case known as the Snapchat Murder. Her preparation and passion for her work resulted in a first-degree murder conviction and a sanity verdict. This case presented difficult and complex legal issues that forced her to get into the mind of the killer to make sense of the senseless for the jury. She presented a clear, concise, well-organized case that enabled the jury to quickly reject the defense contentions in both phases of the trial.

Richard Anderson was a police officer, gang detective, and sergeant for the Oceanside Police Department for 30 years. He brought his extraordinary skills to the DA’s Office, where for seven years he has been assigned to the Gangs Division in North County. Anderson was instrumental in investigating the case of three gang members who killed a man in Fallbrook who was walking home in 2016. During last year’s trial, he ensured that reluctant witnesses came to court and closed any gaps in the case that came up. In another case involving 15-year-old Annabelle Flores, who was killed by gang members while playing on a structure at an Oceanside park, Anderson tracked down difficult witnesses and got them to court for the jury trial. The victim’s family was distrustful of law enforcement and even though they were reluctant to cooperate, Anderson ultimately gained their trust. They remembered how he treated them with respect and kindness when he arrested their own family members. Because of that trust, Anderson worked with the family to generate leads that helped solve the case.

Anderson was then assigned to Economic Crimes Division where he went straight to work in a complex embezzlement case. He interrupted his own vacation to obtain evidence that greatly strengthened the case. Anderson truly embodies excellence and commitment. [TWEET THIS]