You are here: Home1 / News2 / Assistant DA to Retire 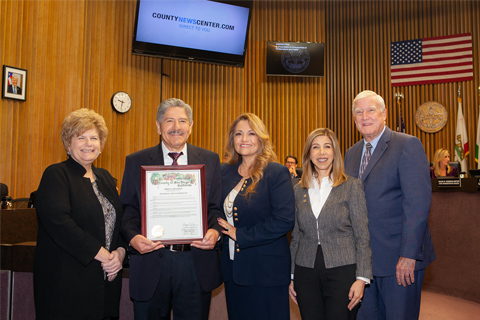 Assistant District Attorney Jesus “Jesse” Rodriguez, 67, who has been the second in command at the DA’s Office for nearly 16 years, will be retiring at the end of December. Rodriguez was recognized today by the County Board of Supervisors with a formal proclamation, presented by Supervisor Greg Cox, for his numerous and outstanding contributions to the County of San Diego.

Rodriguez became the first Hispanic Assistant District Attorney in the County of San Diego when he was appointed by former District Attorney Bonnie Dumanis in January 2003.  As Assistant District Attorney, he serves directly under the elected DA and directs all prosecution, investigative and support operations. Rodriguez oversees, with the DA’s administrative team, an agency-wide staff of more than 1,000 employees and a budget of $193 million. Rodriguez has been responsible for the development of numerous county-wide crime prevention strategies, innovative prosecution programs, and a victim services unit that serves some 15-thousand crime victims each year.

“The Honorable Jesse Rodriguez has devoted his life to public service and has been an icon in the legal profession,” said District Attorney Summer Stephan. “His exceptional contributions to criminal justice span more than 41 years of service as a Deputy Attorney General, a Superior Court Judge and the Assistant District Attorney. As an immigrant and as the first Hispanic to hold this high public safety office, Jesse has served as a role model and a beacon of inspiration when it comes to the values of diversity and inclusion.  I join the residents of San Diego County in expressing our gratitude to ADA Rodriguez, who is both an exceptional professional and human being.”

Before joining the San Diego District Attorney’s Office, Rodriguez was the Supervising Judge of both the San Diego Superior Court South County and Central Criminal Divisions for 13 years and also served as a Municipal Court Judge.  Prior to becoming a judge, he was an attorney in the Criminal Division of the California Attorney General’s Office in San Diego.

Rodriguez has also devoted his time as a member of various organizations, including the San Diego and California Judges Associations has served on the Board of Directors for the National Center for State Courts and the Advisory Board to Casa de Milagros, a recovery home for Hispanic women with alcohol problems.  He is a current member of the California District Attorneys Association.

Assistant District Attorney Jesus Rodriguez’ last day in office will be on December 28, 2018.