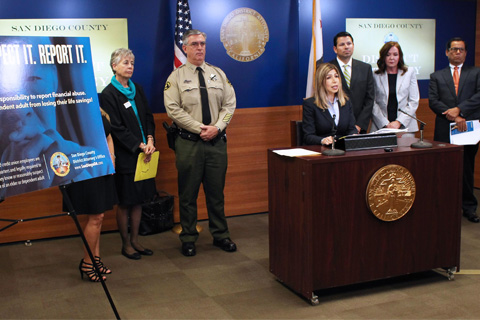 When Marlene Ruiz, a bank employee for over 30 years, noticed that her elderly and wheelchair-bound client was falling victim to an obvious scam, she intervened and was able to prevent the victim from having thousands of dollars stolen from his bank account. Marlene’s story is just one example of financial elder abuse and exploitation that bank employees sometimes witness and are required to report under California Mandated Reporter laws. Coinciding with Financial Elder Abuse Awareness Month, District Attorney Summer Stephan today announced an outreach campaign to increase awareness and remind financial institution employees about their legal duties as mandated reporters when they see suspected financial elder abuse. [TWEET THIS]

“Bank and credit union employees are some of our best eyes and ears for spotting and preventing the exploitation of older and dependent adults,” said District Attorney Summer Stephan. “Employees in financial institutions can make a real difference in the lives of some of the most vulnerable in our community to help protect them from losing their life savings.”

Studies estimate that $36.5 billion is lost annually in the United States due to elder financial exploitation. In 2018, U.S. banks reported 24,454 suspected cases of elder financial abuse to the Treasury Department, more than double the amount five years earlier. The issue of financial elder abuse is likely to grow just as the elder population increases as well. According to the Pew Research Center, an average of 10,000 Americans are turning 65 years old every day, a pace expected to continue through the year 2030. In San Diego County, during Fiscal Year 2017-2018, Adult Protective Services received 4,563 referrals that involved financial abuse allegations, 14 percent of those came from financial institutions.

The goal of the DA’s new outreach campaign is to partner with San Diego Bank and Credit Union branches to prevent financial elder abuse by reinforcing training of bank employees to identify and to report any suspicious activity before it is too late. 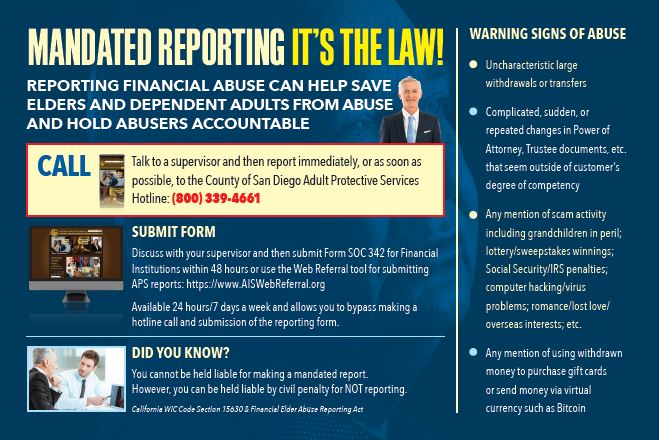 The outreach includes a palm card, a brochure and a training video reminding bank employees about their mandated reporting duties under the law with examples of red flags and warning signs to watch out for, as well as details on how to report any suspected abuse. The video features industry representatives from the Credit Union League and Western Bankers Association, as well as Marlene Ruiz, a local bank employee who helped prevent a financial crime before it happened. Ruiz was honored by the District Attorney’s Office as a Citizen of Courage in 2018 for her actions. In the video, DA Summer Stephan and Sheriff Bill Gore explain the importance of reporting any suspected financial elder abuse.

The DA’s Office will distribute these materials to all the banks and credit unions in San Diego County. The outreach also involves collaboration and participation from the two major sectors of financial institutions, the Credit Union League and Western Bankers Association.

“Our association was proud to work with the California Legislature to enact the Financial Elder Abuse Reporting Act in 2005, and proud to support the legislation making the act permanent in 2011,” said Steve Andrews, president and CEO of the Western Bankers Association. “Our member banks are committed to helping prevent financial abuse of the elderly, and have dedicated millions of dollars to train bank employees to recognize the warning signs of potential abuse of our seniors. We applaud District Attorney Stephan’s efforts to draw attention to this devastating crime, and we are so pleased to be a part of this important awareness campaign in San Diego County.”

“SDCCU is in full support of the District Attorney’s new outreach campaign to help stop elder financial abuse. We applaud their efforts and will do our due diligence to help stop this crime,” said Teresa Campbell, president and CEO at SDCCU, which is a member of the California Credit Union League. “At SDCCU, security of our members is of the utmost importance. As San Diego’s largest locally owned credit union and a member of the California Credit Union League, we encourage all credit unions in the County to use these materials to train front-line staff on identifying red flags and remind them that they are required to report suspected abuse.”

In California, the law defines employees of financial institutions, including all banks and credit unions, as legally required to report suspected elder and dependent adult financial abuse whether they have direct contact or handle a transaction with him/her, or even just observe an incident they suspect may be financial abuse. [TWEET THIS]