You are here: Home1 / News2 / DA Reaches Out Online to Middle and High School Students to Combat Opioid...

San Diego County District Attorney Summer Stephan announced today that her office is hosting a first of its kind virtual opioid assembly – called SDNeeds2Know – streaming from the San Diego School for Creative and Performing Arts to inform students of increasing fentanyl-related overdose deaths related to laced substances and to warn them that any pills that don’t come from a pharmacy could be deadly. The online summit is being held December 16 from 9:30 a.m. to 10:45 a.m.

Every middle and high school in the county are being invited to attend the event virtually, which is being organized and supported by the District Attorney’s Office, the San Diego County Office of Education, Chair of the San Diego County Board of Supervisors Nathan Fletcher, Natural High, and other partners.

“Our region is experiencing drug overdose health crisis,” DA Stephan said. “Over the past few years in San Diego County, the number of fentanyl deaths, especially among young people, has more than quadrupled. This is why we planned this countywide summit focused on middle and high school students, who are asked to log on to this summit from whatever class they’re in for an hour packed with life-saving information.”

The summit on opioids seeks to educate middle and high school students by engaging them in a dynamic livestream event that includes powerful testimonials from overdose survivors, a short play by students, and inspiring messages from local leaders. One of the program highlights is a keynote speech by Chris Herren, a former NBA basketball player who struggled with an opioid addiction and uses his story of recovery as a powerful connection to help those suffering from addiction. His presentation also focuses largely on the social and emotional health of our teens.

Aaron Rubin, who became a quadriplegic after an opioid overdose, and his mother Sherrie will also speak to the students about their experience.

Parents of middle and high school age children are encouraged to contact their schools to confirm their child’s classroom is participating in the summit. Parents are also encouraged to attend. 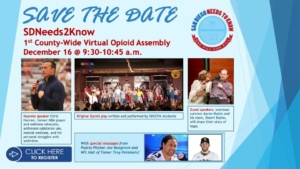 “We have an opioid epidemic gripping our country,” said Acting U.S. Attorney Randy Grossman. “We are needlessly and tragically losing many young lives at an alarming rate. Our young people need to know that experimenting with drugs can have fatal consequences. That pill or powder might be laced with fentanyl. Don’t let one bad decision steal your future.”

San Diego County continues to deal with a fentanyl crisis. Overdose deaths have increased from 33 in 2016 to almost 700 so far this year. Victims include students as young as 16-years-old and young people are experimenting with drugs as early as 12.

“It’s our job as educators to make sure that students are made aware of the dangers that opioids and other drugs present and this summit is an opportunity to hear from individuals who have experienced peril at the hands of these powerful drugs,” said County Superintendent of Schools Dr. Paul Gothold. “To curb these alarming trends, we must continue to create school environments that are safe and welcoming to all students.”

It’s impossible to know what is in street drugs, DA Stephan warned.

“San Diego needs to know that the pills or powder currently sold on the streets, likely contain fentanyl, DA Stephan said. “Literally one pill can kill and has killed in every neighborhood of our county.”

This event would not have been possible without the generous assistance from our donors, who include HIDTA, Sycuan, Natural High, Hazelden Betty Ford, the Prescription Drug Abuse Task Force, and the Warshof Family. The summit was organized by Deputy DA Terri Perez when she served as the DA’s Chief of Narcotics Division and continuing in her current position as Chief of the South Bay Branch.

DA Statement on Dages Not Guilty Verdict
Scroll to top