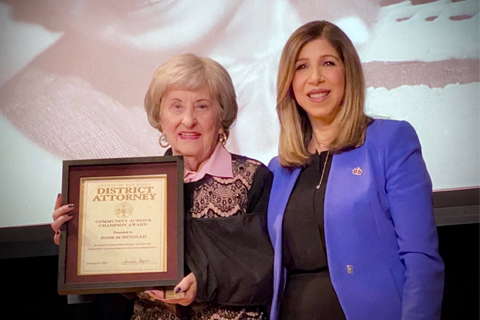 “Stay alive so you can tell the world what they’re doing to us.”

Those were the last words Rose Schindler’s father told her when they last saw each other at Auschwitz II-Birkenau concentration camp. And that is exactly what she did.

Rose survived the Holocaust, met her husband who was also a survivor and immigrated to the United States where they raised their family in San Diego. Now, at 90 years old, Rose has been sharing her and her husband’s story of survival and hope during public presentations and most recently through a published memoir The Two Who Survived.

On Wednesday, Rose spoke in front of more than 200 people at Francis Parker School, sharing her story with a new generation. At the event, District Attorney Summer Stephan also presented the first Community Justice Champion Award to Rose, for her tireless efforts to use her voice to help build a safe and healthy community.

“In the past year, the DA’s Office has seen an increase in hate crimes driven by anti-Semitism and targeting houses of worship,” said DA Summer Stephan. “Our mission is not only to prosecute crimes, but to prevent them from happening in the first place and Rose Schindler is having a real impact on the community by continuing to share her incredible story of surviving the Holocaust and spreading awareness about the devastating impact of hate.  Mrs. Schindler is the epitome of a Community Justice Champion.”

The District Attorney’s Community Justice Champion Award honors individuals whose work or efforts directly or indirectly support the DA’s mission to build safe neighborhoods in partnership with the community and has an impact on equity, fairness and justice in society.