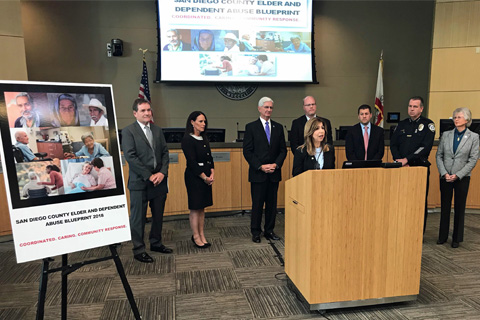 The District Attorney’s Office unveiled the first ever San Diego County Elder and Dependent Adult Abuse Blueprint that commits San Diego County law enforcement and community partners to a written set of goals and a coordinated community response to elder and dependent adult abuse, including model practices and response by law enforcement, prosecution and others. [TWEET THIS]

[WATCH A VIDEO THAT FEATURES THE STORIES OF ELDER ABUSE VICTIMS]

Because of a rise in elder abuse prosecutions as well as the impending explosion of the elder population, the District Attorney brought together countywide stakeholders in November of last year for a first-ever “think-tank” of experts, including professionals from all disciplines that serve as touchpoints for elder and dependent adults. Those experts identified gaps and needs in our community, and set goals for the future which resulted in the creation of the Blueprint.

“Our society will be judged on how we treat our most vulnerable,” said District Attorney Summer Stephan. “With this countywide initiative, we’re proactively responding to an increase in elder abuse crime as this population continues to grow. A coordinated response is needed now more than ever to protect seniors and keep them safe in our community.” [TWEET THIS] 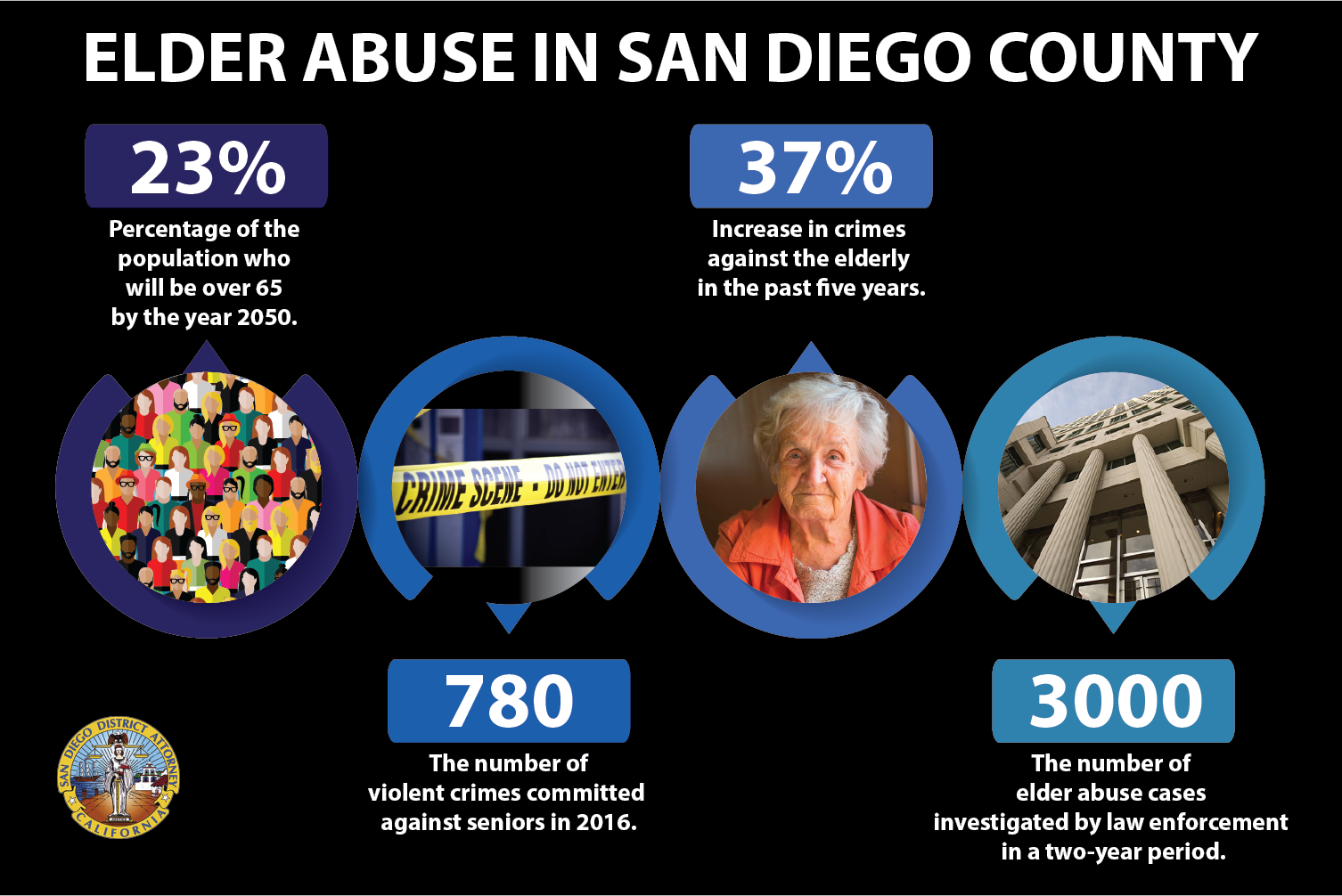 In San Diego County, almost 23 percent of the population is projected to be over age 65 by the year 2050, which is a 10 percent increase from 2015. With the older population increasing, elder abuse is also on the rise.

In 2016, there were 780 violent crimes against senior citizens, an increase of 13 percent from the previous year and 37 percent from five years ago. These 780 crimes included 14 homicides, 24 rapes, 205 robberies, and 537 aggravated assaults. Between fiscal years 2015 and 2017, law enforcement investigated over 3,000 crime cases for abuse of elders 65 years and older. During that same time period, elder abuse cases filed by the DA’s Office and the San Diego City Attorney’s Office increased by 39 percent.

“What makes elder abuse so heartbreaking, and so difficult for outsiders to recognize, is that it often comes at the hands of caretakers or family members who have the victim’s trust,” said San Diego City Attorney Mara W. Elliott. “We cannot protect elders from fraud, neglect, and abuse unless we recognize these crimes and are aware of the resources available to address them. That’s why regional cooperation and mobilization is so critical.”

Adult Protective Services has continued to receive an increased number of referrals from fiscal years 2014 to 2017.  They received 14,741 referrals in fiscal year 2016-2017 and handled 9,872 cases. Financial abuse was the most common form of abuse seen in their confirmed cases, followed by mental suffering and physical abuse.

[WATCH A VIDEO THAT FEATURES THE STORIES OF ELDER ABUSE VICTIMS]

“The huge growth in our senior population is already testing families, hospitals, care facilities and communities. And as the population grows, so does the potential for abuse and neglect,” said County Supervisor Dianne Jacob. “The region needs a roadmap, a blueprint, to address the growing challenges facing vulnerable seniors and their families.”

“We cannot tolerate abuse of the elderly or vulnerable in any form,” said Chuck Matthews, Interim Director of the County’s Aging and Independence Services. “If you suspect abuse of any kind is occurring, we encourage you to call Adult Protective Services so that we may investigate and make sure no one is being taken advantage of or harmed in any way.”

This blueprint includes a coordinated response from all the agencies that serve and protect elders.  The document includes best-practice guidelines for dispatchers, first responders, follow-up investigators, prosecutors, and every agency in between. It also takes into consideration the various health challenges, such as Alzheimer’s or other related disorders and/or cultural issues facing our San Diego aging population.

“Based on the projected growth of the elder population, the Sheriff’s department is committed to utilizing all of our dedicated resources for the successful prosecution of those committing crimes against elders and dependent adults,” said Sheriff William Gore. “In partnership with all of the allied agencies, as well as the implementation of the San Diego Countywide Elder and Dependent Abuse Blueprint, we will ensure crimes against the elders and dependent adults will not fall to the wayside and will remain one of our top priorities moving forward.”

“Let this initiative serve as a warning to those who victimize elders and dependent adults that law enforcement will aggressively investigate these cases to the highest priority and hold them accountable to the fullest,” said Escondido Police Chief Craig Carter, who is the president of the San Diego County Police Chiefs Association.

The San Diego Countywide Elder and Dependent Adult Abuse Blueprint will be implemented through the leadership of the many stakeholders who attended the March 1 Summit on Elder Abuse and Neglect, hosted by the District Attorney.  It will be a living document that will be added to over time, as our community partners learn even better or smarter strategies to address issues surrounding the protection of elders.

Victims of Elder Abuse Tell Their Stories
Scroll to top