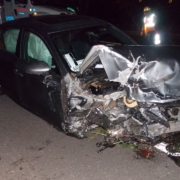 San Diego County District Attorney Summer Stephan said today that the county has already set a grisly record of 35 people killed in DUI crashes so far this year, representing the most fatal DUIs recorded in 20 years of record keeping.

Last year, despite the decrease in traffic on the roadways due to the ongoing COVID -19 pandemic, San Diego County saw its worst year in over two decades with 30 DUI fatality cases that killed 33 people. This year, there are already 34 such cases with 35 victims. Historically, the county averages between 15 and 20 DUI-related fatalities each year.

In addition, data shows average blood-alcohol levels are also higher than last year – increasing to .18%. Prosecutors say that more than half of individuals being arrested for driving under the influence have both alcohol and drugs in their system—a deadly combination.

“Drivers know the risks and the dangers of driving under the influence of alcohol or drugs, yet it seems more than ever they’re being reckless and putting lives at risk by then they drink, abuse drugs drinking excessively and/or using drugs and then getting behind the wheel,” said DA Summer Stephan. “Prosecuting and investigating these serious cases require a specialized team of prosecutors and investigators, who are working every day to hold offenders accountable and deter this deadly behavior.”

For the eighth year in a row the San Diego County District Attorney’s Office is receiving a grant from the Office of Traffic Safety to prevent and prosecute impaired driving deaths and DUI -drugs. This year’s grant funding total is $530,600. For cases in which someone dies at the hands of a DUI driver – alcohol or drug impairment— the cases are investigated as potential murders, instead of approaching the case as a DUI car crash in which someone died.

Funding from the DUI Prosecution Grant supports the District Attorney’s Office in handling cases through each step of the criminal process. In fatal and major injury DUI vehicle collisions, members of the team may respond to the crash scene in person to assist in the investigation. The program allows the District Attorney to focus specifically on holding those who decide to drive impaired accountable for their dangerous actions. To date, the Office of Traffic Safety has given more than $3.2 million in grants to the DA’s Office. This year, the DA is expanding the grant to include specialized training and prosecution of DUI drug cases.

“Experience and knowledge are critical for prosecutors to build successful impaired driving cases,” OTS Director Barbara Rooney said. “This program provides resources, tools and a strong training network for DUI prosecution teams that hold people who drive under the influence accountable for their actions.”

While fatal DUI crashes continue to increase, non-fatal DUIs have gone down. More than 5,130 DUI-related cases were prosecuted last year, a decrease of about 55% from the 9,400 two years ago. When you include DUI crashes with injuries into the number of fatal crashes, the District Attorney’s Office prosecuted 396 DUI cases with injuries or fatalities – which is a decrease of 12% from the 445 injury crashes of 2019.

As part of the grant and with assistance from the State’s Traffic Safety Resource Program, the DUI Homicide Unit coordinates and participates in DUI prevention and awareness in schools, military bases and colleges. It also provides training to local law enforcement agencies.

“By getting the message out, we are hoping for voluntary compliance from motorists,” said California Highway Patrol Border Division Chief Omar Watson. “However, officers will be looking for anyone who is driving impaired and posing a danger on the roadways.  As a reminder to the motoring public, don’t drive impaired, have a ride plan or pre-designate a driver, and remember, one bad decision is not worth a lifetime of repercussions.”

The DUI Homicide Unit, which launched in 2014, streamlines complex DUI cases by creating expertise within the DA’s Office. The specialized unit creates uniformity in sentencing among the four adult courthouses. In addition, the unit helps law enforcement adapt to changes in technology by having a designated DA Investigator who is trained in the latest techniques in collision reconstruction. Since its inception, the unit has prosecuted more than 170 cases.

In recent years, California has seen an increase in drug-impaired driving crashes statewide. The District Attorney’s Office supports OTS’ efforts to remind the public that “DUI Doesn’t Just Mean Booze.” If you take prescription drugs, particularly those with a driving or operating machinery warning on the label, you might be impaired enough to be cited for DUI. Marijuana use can also be impairing, especially in combination with alcohol or other drugs, and can result in a DUI arrest and conviction.

“In the wake of the deadly increase of DUI and Drug related crashes that result in death, we are calling on all drivers to take a pledge today to not drive after drinking alcohol or consuming drugs including marijuana,” said DA Stephan. “We are also calling on our community to take all reasonable measures to stop anyone from driving under the influence. We will continue to bring stiff accountability for those who harm others through reckless driving under the influence, but the real win is when we can together prevent death and injury in the first place. Grant funding from the California Office of Traffic Safety through the National Highway Traffic Safety Administration helps us be better, more efficient and increasingly effective in how we handle these challenging cases.”