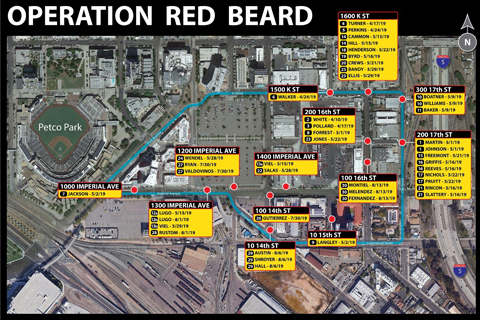 In early 2019, authorities say it had become increasingly easy to buy illegal drugs in a roughly one-square-mile area of the East Village bordering Petco Park. Dozens of drug dealers had set up shop, peddling everything from methamphetamine to cocaine. Along with the drugs came concerns about a potential increase in associated crimes. [TWEET THIS]

In response to complaints from the community, authorities set up an undercover sting operation designed to identify dozens of dealers who were selling significant amounts of drugs, get them off the street and reduce overall crime in the neighborhood. The San Diego Police Department joined forces with the San Diego County District Attorney’s Office in April 2019 to launch the operation in a targeted, three-by-four block area just east of Petco Park. Over the next four months, undercover officers made dozens of buys and built cases against a small army of dealers. During the operation, officers bought a variety of drugs including meth, heroin, and cocaine in amounts ranging from.01 gram to three grams.

“This is an excellent example of a coordinated, proactive response by law enforcement to address an uptick in crime and take action to improve safety in an area of downtown that continues to provide public safety challenges,” said San Diego County District Attorney Summer Stephan. “By far, the most common illegal drug being sold in the area was meth—something that is consistent with drugs found in people who are arrested in the county.”

On October 17, a grand jury was impaneled to hear evidence from the operation and on October 30, it handed down 30 indictments against 41 defendants. Bench warrants were issued and the San Diego Police Department started making arrests. As of today, 32 defendants have been arrested and 30 have been arraigned in court. Most of the defendants have been charged with various felony crimes including transporting and selling a controlled substance, which carry potential sentences of between six months and 10 years in jail if convicted.  About 70 percent of the defendants are prior felons with previous convictions for crimes that include kidnapping, gang-related assaults, and attempted murder.

“This operation is a great example of how our department responds to the needs and concerns of community members,” said SDPD Chief David Nisleit. “The San Diego Police Department worked closely with the San Diego County District Attorney’s Office to combat this criminal activity and ensure those responsible are held accountable.”

Increasingly, authorities are seeing various kinds of street drugs, including heroin, cocaine and opioids laced with deadly fentanyl. “Even a tiny amount of fentanyl can kill in moments, which is another reason we wanted to stop the sell/buy cycle in the East Village,” DA Stephan said. [TWEET THIS]

This is Why You Should Report Fraud