You are here: Home1 / News2 / Preventing Human Trafficking on ‘World Day Against Trafficking in... 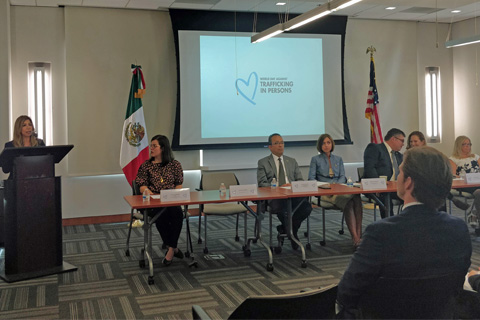 Every year there is an estimated 8,000 new victims of sex trafficking in San Diego County, making human trafficking the second-largest underground economy after drugs, generating over $810 million in revenue per year. To bring awareness to this worldwide issue, the United Nations’ designated July 30 “World Day Against Trafficking in Persons.” To commemorate this day, the San Diego County District Attorney’s Office joined the Bilateral Safety Corridor Coalition and the Consulate General of Mexico in San Diego during a “Human Trafficking Awareness and Prevention” conference, where District Attorney Summer Stephan explained the impact of this crime in our region. [TWEET THIS]

“Human trafficking lies in the vulnerability of people” said District Attorney Stephan. “What is really important is for government to continue to enact laws that protect the vulnerable from this terrible form of exploitation and slavery. What is even more compelling than enacting laws is acting upon them in order to free those that have been subjugated to this terrible form of human rights violations. This day against trafficking of persons is not just a hopeful day, but it is a day of action.”

The “Human Trafficking Awareness and Prevention” conference hopes to bring attention to the growing problem of trafficking occurring in San Diego County and across the country. San Diego was identified by the FBI as one of the top 13 high intensity child prostitution areas. Although San Diego does share a border with Mexico, human trafficking does not require that a victim be moved over state or international borders. Human trafficking is also a domestic issue inside the state of California and San Diego County.

This event hopes to highlight the importance of government action in fighting the trafficking of people and encourages everyone to become more involved in helping stop this crime. Other keynote speakers included Consul General of Mexico in San Diego Carlos Gonzalez-Gutierrez, Bettina Hausman from the United Nations Association-San Diego Chapter, and Marisa Ugarte from the Bilateral Safety Corridor Coalition.