You are here: Home1 / News2 / International Manhunt for Murderer 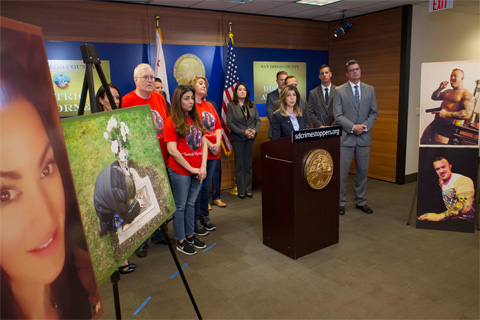 San Diego County’s top law enforcement official, District Attorney Summer Stephan, joined the U.S. Marshals Service, San Diego Police Department and Phoenix Police Department in asking for the public’s help to locate Raymond McLeod, who is wanted for the murder of Krystal Mitchell. [Watch the news conference here.] McLeod is believed to be on the run in Central America or Mexico.  His last reported location was in Guatemala in March of 2017, but he has also been spotted in Belize and in Mexico.

“We’re not going to let this defendant run from justice and get away with murder,” said District Attorney Summer Stephan.  “We’re asking anyone with information to come forward so McLeod can be captured, returned to San Diego and held accountable for his brutal crime. Let us not forget the innocent victim who lost her life.” [TWEET THIS]

On June 10, 2016, San Diego police officers responded to a 911 call of a woman not breathing inside of an apartment in the 7600 block of Mission Gorge Road in San Diego. The woman, later identified as 30-year old Krystal Mitchell from Phoenix, Arizona, was pronounced dead at the scene by medics. Detectives from the San Diego Police Department’s Homicide Unit responded to the scene and determined that Mitchell was last seen alive with her boyfriend (Raymond McLeod). Mitchell and McLeod, also from Phoenix, Arizona, had been in San Diego visiting friends. 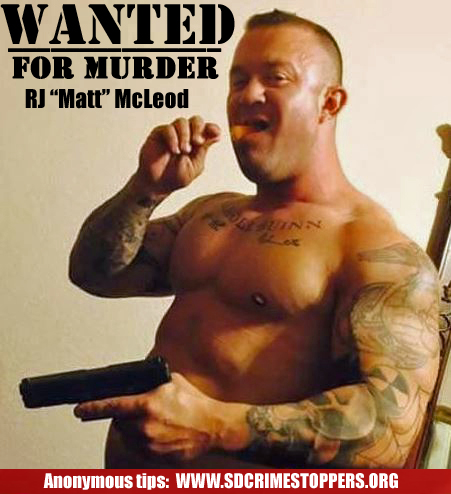 McLeod is believed to have fled to Mexico after Mitchell’s death.  The District Attorney’s Office has charged McLeod with murder and a warrant has been issued for his arrest. Authorities are withholding details of the murder, but say there were signs of struggle at the murder scene. [VIDEO]

The victim’s mother, Josephine Funes Wentzel, is a former police detective who has been instrumental in helping authorities search for McLeod.  Wentzel has generated leads for law enforcement and helped spread word about the international manhunt on social media.  [TWEET THIS]

“Catching McLeod will not bring my daughter back, but would prevent this monster from killing someone else’s mother, daughter or sister,” Wentzel said.  “It would also mean that Krystal’s children can sleep at night, knowing he’s been stopped. McLeod has a history of extreme violence against women and even a small child. His tendency is to stalk his victims and strike when they least expect it.  He is a ticking time bomb that could go off at any moment and I hope the public will take action and help us bring him to justice.”

The U.S. Marshals Service is leading the manhunt and is poised to follow up on any information about McLeod’s whereabouts.  Steve Jurman, U.S. Marshals Fugitive Task Force Commander, said, “The U.S. Marshals and all our partner agencies are using every resource to locate and arrest McLeod.  There is no better law enforcement tool than the public’s help and vigilance to locate fugitives from justice.  This murder was so senseless and violent that even McLeod’s friends have cooperated with police to help try to help.” [TWEET THIS]

“Raymond McLeod came to San Diego and committed a brutal crime,” said San Diego Police Chief David Nisleit.  “McLeod fled San Diego and even the United States, however detectives in our Homicide Unit will continue working each and every lead in this case and will not stop until McLeod is behind bars.  Our partnership among multiple law enforcement agencies along with the public’s help will ultimately result in McLeod’s capture.” [VIDEO] 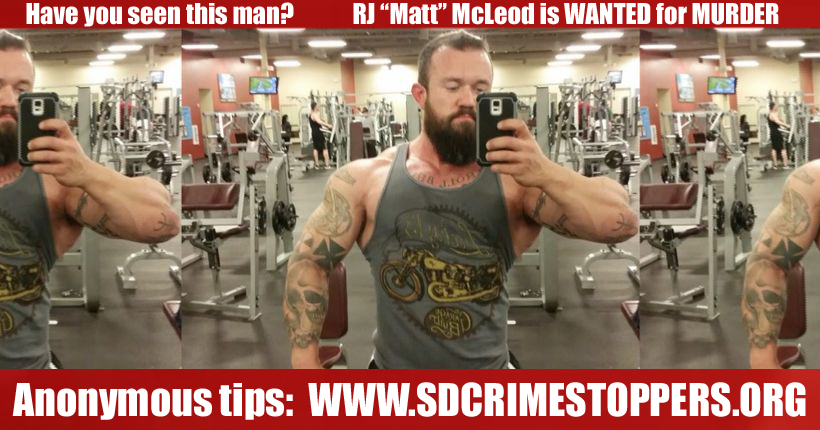 Raymond McLeod is a former United States Marine who may have access to weapons. McLeod is a white male, 34-years-old, 5 feet11 inches tall, weighs 245 pounds, and has multiple, recognizable tattoos on both of his arms. McLeod also goes by the nickname of “RJ” but may be using the name “Matt” or “Mateo” in attempt to hide his identity.  McLeod may have put on weight and is likely to have a beard.

Anyone with information on this murder or the location of Raymond McLeod is asked to call the Crime Stoppers anonymous tip line at (888) 580-8477, or log onto www.SDCrimeStoppers.org for information on how to send anonymous web and mobile app tips. Crime Stoppers is offering a $1,000 reward in addition to the U.S. Marshals Service who is offering a $10,000 reward to anyone with information that leads to an arrest in this case.

Anonymous email and text messages can be sent via www.SDCrimeStoppers.org. You can also download the CrimeStoppers app in order to send in a tip. [TWEET THIS]