You are here: Home1 / News2 / Going to Bat for Victims 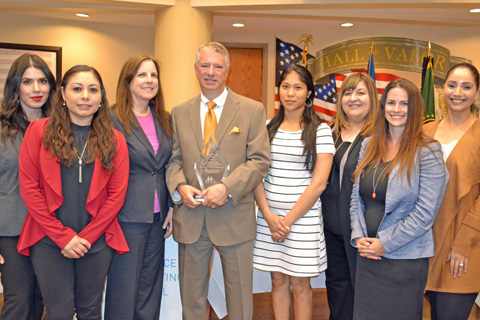 When notorious convicted murderer, Betty Broderick, was up for parole in 2017, it was Deputy DA Richard Sachs who represented the people of California at a record-breaking 11-hour hearing, arguing against her release. Ultimately, the board voted to deny parole for 15 years and Broderick will remain in state prison where she is serving time for the 1989 murders of her ex-husband and his new wife at their Hillcrest home. It was just another day at the office for Sachs, 60, who was recognized Thursday by the Victim Assistance Coordinating Council with a ‘Victim Advocate Award’ at its 30th Annual Candlelight Tribute for Crime Survivors on Thursday. [TWEET THIS]

Sachs, a statewide expert on parole issues and the founder the San Diego County District Attorney’s Lifer Hearing Unit – the first in the state – represents the DA’s Office before the Board of Parole when it is considering parole suitability for those who have been sentenced to life terms. Because of his expertise, Sachs is a go-to expert in California on all things involving the parole process and he has developed a reputation as a staunch advocate for family members whose loved ones have been killed. He’s a lifeline for victims or their next of kin throughout the parole process.

“Richard Sachs combines his legal expertise with a sense of compassion that loved ones and next-of-kin need when navigating the parole process,” said District Attorney Summer Stephan. “I don’t know anyone more knowledgeable on parole issues in this state than him. Our office and the community are lucky to have such a resource fighting to protect public safety.”

Sachs founded the DA’s Lifer Hearing Unit in 1995 to ensure family members are not left out of the parole process, have a voice, and are treated with dignity and respect. He has been a Deputy District Attorney more than 34 years.

The DA’s Lifer Unit has been featured on national and local news broadcasts and has been referred to by the Board of Parole Hearings as a “model for the state.” Sachs also has extensive experience in appellate law and serves as the lead author for amicus briefs for the California District Attorneys Association, Lifer Committee. He also serves as the lead author for the lifer training material for the California District Attorneys Association. He is a dedicated victim advocate and has designed victim notification systems for the Lifer Unit working around the clock to ensure that no victim or next of kin is denied their opportunity to submit a victim impact statement.

Sachs, a native of Chicago, graduated from the John Marshall Law School in 1983. He served as a Judicial Clerk for the Presiding Justice of the Fourth District Court of Appeal and worked in a large civil firm in Los Angeles before joining the District Attorney’s Office in 1985. [TWEET THIS]

Remembering Every Single One
Scroll to top