You are here: Home1 / News2 / DAI Named Peace Officer of the Year 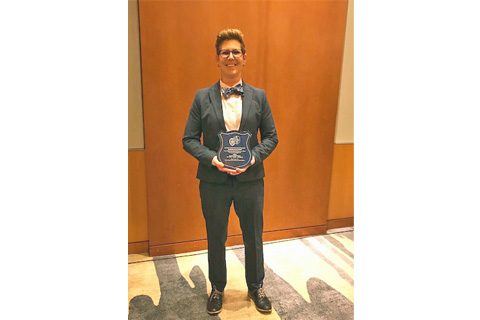 In 1979, Craig Woolley was brutally stabbed to death in bed.  The case went cold when no suspect was identified, although evidence collected included the knife, fingerprints, and swabs of blood.  In 2006, the San Diego Police Department identified Jeffrey Cauble, a Marine stationed at Camp Pendleton in 1979, from one fingerprint on a drinking glass. Cauble, who was now living in Colorado, was interviewed in 2009, but denied knowing the victim or being at the residence. A DNA sample from Cauble subsequently matched several items of evidence at the scene; however, more evidence was needed. It was until nearly 10 years later, when District Attorney Investigator Sandra Oplinger was assigned to the case that Cauble was brought to justice. On Friday, April 26, 2019, the San Diego Police Officers Association recognized Oplinger with the Peace Officer of the Year Award for her work in the resolution of this nearly 40-year-old cold case.

“Sandra Oplinger exemplifies the work of the elite investigative team at the District Attorney’s Office which takes on the tough mission of pursuing justice on cold case homicides,” said San Diego County District Attorney Summer Stephan. “Using her excellent investigative skills, attention to detail, and expertise, Sandra refused to give up and was instrumental in bringing a measure of justice to the victim’s family, holding the defendant accountable for this murder.”

In 2017, when Oplinger was assigned to the case, she employed various investigative techniques to obtain additional evidence against Cauble. She coordinated with the San Diego Sheriff Department’s Detentions Intelligence Group (DIG) to advance the investigation in Colorado. Eventually, Cauble made admissions regarding the murder of Craig Woolley. In February 2019, he was convicted of second-degree murder and is pending a sentence of 16-years-to-life in prison.

“Sandy is driven to seek justice for family members who have lost loved ones to violent crimes,” said Chief Investigator Jorge Duran. “Her persistence and attention to detail has brought closure to many families left without answers regarding their loved one’s demise. She is a consummate professional and an asset to the District Attorney’s Office.”

He Stole Millions of Dollars from Dozens of People