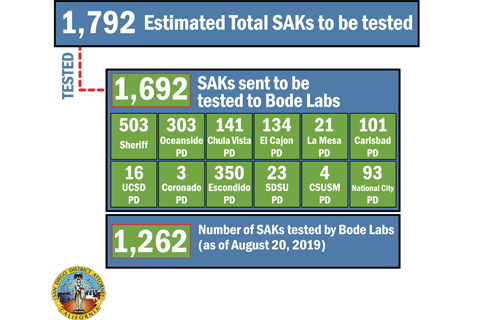 The San Diego County District Attorney’s Office announced today that 1,692 untested sexual assault evidence kits from 12 police agencies across the county have been sent to an independent lab for testing over the past 17 months. Lab results have come back from 1,344 of the kits which are now in the process of being uploaded into the FBI’s national CODIS (Combined DNA Index System) database.

Reducing the countywide backlog of untested sexual assault kits (SAKs) has been a priority of DA Summer Stephan since taking office. In April of last year, DA Stephan announced her office had identified funding and retained Bode Cellmark Forensics of Lorton, Virginia to begin the project. To date, $1,108,545 has been spent on the testing. Sheriff Bill Gore and the San Diego County Sheriff’s Department are key partners in the project. The Sheriff’s Department has been instrumental in identifying, preparing and delivering the kits for testing.

The DA’s Office is reviewing the results from the CODIS uploads which could lead to new investigations. Early results from the testing revealed that about 40% of the kits contained DNA foreign to the victim. The DA’s Office estimates there are only about 100 remaining evidence kits from the police agencies that are participating which still need to be sent for testing.. The San Diego County Sheriff’s Department submitted the largest number of kits for testing, followed by Escondido PD and Oceanside PD. The testing does not include kits from SDPD, which is conducting its own testing in-house at their crime lab.

“I’m proud of the excellent progress we’ve made on getting these kits tested, which may contain powerful evidence that can speak on behalf of victims and prevent a future assault,” said DA Stephan. “Rape cases leave victims with deep emotional and physical wounds. I’m committed to doing everything we can to solve their cases and I appreciate the dedication and hard work of all our county partners to get this project completed.”

Over the past year, the District Attorney’s Office has been providing ongoing updates at community events about the testing progress for various partners and stakeholders, including the Center for Community Solutions (CCS) late last year and the San Diego area chapter of the National Organization for Women in June.

In addition to the testing project, the DA’s Office also strongly supported Senate Bill 22, known as the Sexual Assault Victims’ DNA Bill of Rights, which passed the legislature earlier this month and awaits Governor Newsom’s signature. The bill sets firm timelines for all law enforcement agencies submit sexual assault kits to crime labs and firm timelines for crime labs to test the kits. In her letter of support to the governor, DA Summer wrote, “Having untested SAKs, sitting on shelves collecting dust, is no longer acceptable.”

The Center for Community Solutions, which has a mission to end relationship and sexual violence by being a catalyst for caring communities and social justice, supported the DA’s initiative when it was first announced. “It’s important to all of us to have the backlog of rape kits tested in cases where survivors have provided consent for the testing,”  said Verna Griffin-Tabor, CEO and Executive Director of the Center for Community Solutions.

The Joyful Heart Foundation, which is working to have all rape kits tested in the U.S., has also strongly supported San Diego’s testing initiative and the County’s focus on delivering justice for victims.

Every 98 seconds, someone is sexually assaulted in the United States. It takes a tremendous amount of courage for survivors of sexual assaults to come forward. Victims in San Diego County can be assured that law enforcement is invested in helping them achieve justice and hopefully a sense of healing after enduring such a traumatic experience.

How to Report Embezzlement Crimes