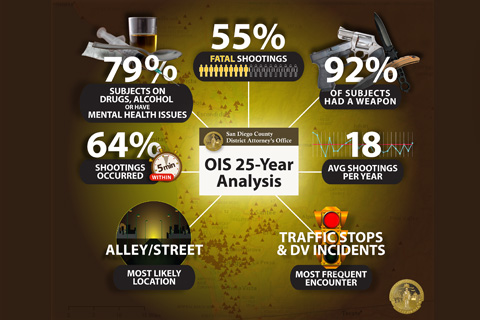 An updated analysis of officer-involved shootings in San Diego County is revealing commonalities in many of the incidents, including the time and day of the week they occur, the impact of drug use, and the use of less-lethal force. [TWEET THIS]

The study shows that between 1993 and 2017, 451 people were involved in violent confrontations with police in San Diego County, which ended with them being shot or killed. Fifty-five percent of the shootings were fatal and 79 percent of the incidents included people who had drugs in their systems and/or mental health issues. Of the 65 percent with drugs in their system, methamphetamine topped the list. The most frequent time of day for a deadly encounter was the midnight hour of Friday. The most frequent encounters were traffic-related stops and domestic violence incidents. Read the report.

The 25-year, in-depth analysis is believed to be the most comprehensive report on officer shootings in San Diego history and among one of the few in the nation. The report was commissioned and prepared by the San Diego County District Attorney’s Office with the goal of transparency, a better understanding of the dynamics of officer-involved shootings, and to improve officer and community safety. The report adds five additional years to the previous 20-year study released in 2015.

Among the changes noted in the intervening five years were slight increases in the percentage of officers killed or injured in incidents, and the number of incidents where the subject’s statements or behavior indicated the incident was a “suicide by cop.”

“Reviewing officer-involved shootings and deaths that occur while someone is in the custody of law enforcement is one of my most serious responsibilities,” District Attorney Summer Stephan said. “We are committed to leverage this valuable data to increase safety for the public and peace officers. In May, our office announced several initiatives we developed to improve the way law enforcement interacts with people with mental health and substance abuse issues. We’re funding access to crisis intervention and de-escalation training for police officers, and providing a mental health checklist that families can use when calling 911 to hopefully improve the outcome when their loved one comes into contact with police.”

Using data from each in-depth case investigation and data from police departments, a wide variety of factors were analyzed including the race and gender of the subjects shot, the month, time and day shootings occurred and the average age of the subject and of the officers shooting.

Findings include that the majority of shootings take place within five minutes of police arriving to the scene and that the most common location for an officer-involved shooting to take place is an alley or street as a result of a traffic stop or a domestic disturbance. In 92 percent of the incidents, the subject had a weapon. Thirty-eight percent of those subjects had a gun.

Domestic disturbance calls are the second most-likely type of police call to result in an officer-involved shooting with traffic stops accounting for the primary type of encounter.

When officer-involved shootings occur, the law enforcement agency that employs the peace officer conducts an internal investigation which includes a review of whether or not that agency’s policies and procedures were followed or whether additional training needs to be addressed. A criminal investigation is also completed by the homicide unit.

The role of the District Attorney’s Office is to provide an independent review of all shootings and other use of deadly force, fatal and non-fatal, to determine if there is criminal liability. It is one of the most serious responsibilities of the District Attorney. This particular review does not examine compliance with the policies and procedures of the respective law enforcement agency, ways to improve training, or issues related to civil liability.

When the DA’s review is complete and if there is a determination that the use of deadly force was justified, a letter summarizing the evidence, including statements of the sheriff’s deputy or police officer and other witnesses, is written and delivered to the respective police chief or Sheriff. We release relevant body-worn camera video to the public and we post our letter on our public website.

The FBI and the U.S. Attorney’s Office attend briefings by the investigating agencies following an incident. The FBI, U.S. Attorney or the Attorney General can also elect to investigate and review an officer-involved shooting. [TWEET THIS]

An Important Message About Child Abuse
Scroll to top