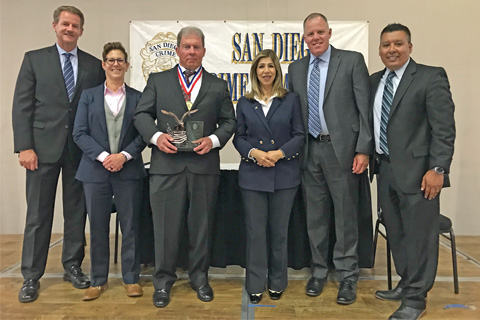 District Attorney Investigator Anthony Johnson was recognized with the Blue Night Award by the San Diego County Crime Commission for his outstanding work on a cold case homicide.

Every year, the San Diego County Crime Commission recognizes law enforcement officers who have gone above and beyond the call of duty to serve the community.

The DA’s Bureau of Investigation nominated Johnson for his work in an August 2000 homicide cold case, in which 71-year-old victim LeRay Parkins was fatally beaten and left in an alley, with no witnesses to the incident. The case went cold for more than 17 years and was ultimately revived in 2018 by Investigator Johnson, who reviewed the crime scene photos and noticed the pockets of the victim’s shorts were pulled inside out, possibly by the suspect(s) during the robbery and may still hold DNA evidence.  He met with the San Diego Police Department’s Forensic Biology Unit and asked that the shorts be tested for DNA.  The lab subsequently identified a mixture of DNA in four locations on the right front pocket of the victim’s shorts.  The DNA was submitted to CODIS and a hit came back identifying Edward Brooks, who was one of the original suspects identified by SDPD detectives in 2000.  Investigator Johnson conducted further investigation and ultimately wrote arrest warrants for three suspects who were all living outside of California; Edward Brooks, Lester Bell and Terrance Brown.  DAI Johnson coordinated with the U.S. Marshals Service and secured the arrests and extraditions of all three suspects, who were all charged in San Diego with the murder of Mr. Parkins.

Investigator Johnson has been a peace officer for more than 39 years.  He was employed by the San Diego Police Department for 32 years, during which time he served over six years as a homicide detective.  He joined the San Diego County District Attorney’s Office in November 2011 and has been assigned to the DA’s Cold Case Homicide Team for the past four years.

Warning About Cocaine Laced with Fentanyl