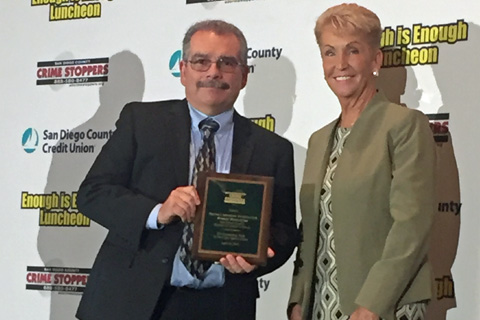 Bob was selected as one of several law enforcement personnel who have truly performed in an exemplary manner for their department and their community. Bob was recognized for his work on a September 2017 case involving a peace officer from Yuma, Arizona, accused of forcibly raping his wife’s cousin in San Diego.  The victim had to jump out of a window to escape and called the police.  Investigator Hinkledire developed a rapport with the victim, who was devastated by the acts of a police officer and family member. Her trust in law enforcement faded. Had it not been for the compassionate demeanor of Investigator Hinkledire, she would not have testified and Hinkledire was able to restore her trust in law enforcement.  During the investigation, Hinkledire traveled to Yuma, discovered a second victim and convinced her to testify.

Thanks to Investigator Hinkledire’s investigation, experience, witness management, and tenacity, the former police officer was found guilty and sentenced to 20 years in prison. [TWEET THIS]

Remembering Every Single One