You are here: Home1 / News2 / Community of Hope Comes Together for Domestic Violence Victims 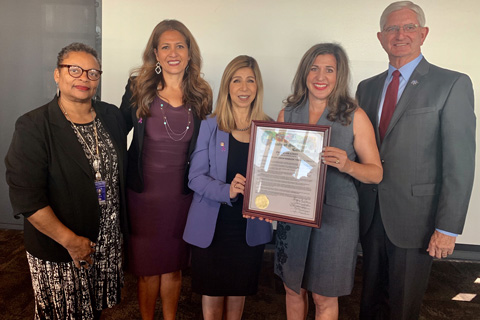 Domestic Violence Awareness Month is a time for reflection on all that has been accomplished to prevent violence and abuse in our communities, and all that must still be done. Today, the District Attorney’s Office joined the San Diego Domestic Violence Council (SDDVC), county officials and other social service agencies together as a “Community of Hope” to provide resources, education, prevention and awareness of domestic violence to professionals and community members The event is the first of many to raise awareness throughout the month of October, which is Domestic Violence Awareness Month.

“Domestic violence not only harms the direct victim but also has a devastating ripple effect on children, families and communities.  This is why we must fight it together as a community united to break the cycle of violence,” said District Attorney Summer Stephan. “We are committed to collaborating with partners from a variety of fields to bring accountability through prosecution and bring hope through early prevention and intervention.”

Throughout this past year, the San Diego County DA’s Office served the SDDVC by coordinating training for hundreds of professionals in our county on domestic violence as well as other family violence topics such as mandated reporting, being trauma-informed and risk assessment.

“Together, we are helping to bring light to this issue and let those experiencing abuse know they are not alone,” said SDDVC President Jessica Yaffa. “There are so many resources in our county to help them. We want them to know, there is hope, if they reach out.”

San Diego County Supervisor Greg Cox presented the Live Well San Diego proclamation to the SDDVC during the event, which also included a resource fair for services to help survivors of domestic violence. Also at the event, Deputy District Attorney Claudia Grasso was named President for the San Diego Domestic Violence Council. Grasso is the Assistant Chief of the DA’s Family Protection Division. The SDDVC is a collaboration of a multitude of organizations and community members seeking to reduce and prevent domestic violence in our county, including County of San Diego’s Health and Human Services Agency, the DA’s Office, the City Attorney’s Office, the Sheriff’s Department, and other law enforcement and social services agencies.

If you or someone you know is being abused by a current or former partner, call the National Domestic Violence Hotline (1-800-799-7233) for confidential support and assistance planning for safety.

A Unique Story
Scroll to top