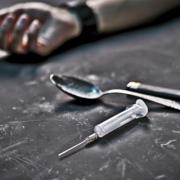 A man who sold heroin to a San Diego woman, leading to her fatal overdose, was sentenced Wednesday to eight years in local prison. [TWEET THIS]

Marc Gressingh, 36, pleaded guilty on June 13, 2017, to selling heroin and a prior conviction for narcotics sales. A judge split the eight year sentence into one year of custody and seven years of mandatory supervision.

The sentencing comes as more people are dying each year in San Diego County from accidental overdose or substance abuse intoxication of opioids, part of a national epidemic.

Deaths in the County from opioid abuse have roughly doubled in the last 15 years.

“An addiction to prescription drug opiates often leads people to begin abusing heroin, which is cheaper and easier to find,” said District Attorney Summer Stephan. “We’re responding to the opioid addiction crisis that is claiming the very lives of so many in our community and stealing the promise of their future by combating this issue on multiple fronts.”

[RELATED: The DA’s Office is taking a closer look at the fatal prescription drug abuse epidemic and what’s being done to fight it, in a series of short videos.]

Today’s sentencing is the culmination of a criminal case that began the morning of March 11, 2016. The San Diego Police Department responded to a reported death at a residence in San Diego. Paramedics on scene tried to revive the victim, Rebecca Mercurio, 31, however their efforts were unsuccessful and Ms. Mercurio died as a result of a heroin overdose. Based on initials reports that Ms. Mercurio had purchased the heroin in the East County area, the San Diego Sheriff’s Department took over the investigation into her death. After an extensive and lengthy investigation, Sheriff’s Department Det. Jacob Sanchez was able to determine the defendant had sold Ms. Mercurio the lethal heroin at a taco shop in East County on the night of March 10, 2016.

“Prosecutions like this send the message that when you sell heroin to another human being, you are literally providing them with toxic poison that can slow their breathing to the point of death. We also focus on prevention through education and on providing important programs that work to get defendants who have substance abuse issues help through Collaborative Court programs like Drug Court, Behavioral Health Court and Veterans Court,” DA Stephan said.

According to the San Diego County Medical Examiner, the increase in heroin deaths seen since 2005/2006 has continued, and heroin was the most common drug seen in those between the ages of 20 and 29 over the past five years. In 2015, 90 people died of heroin doses in San Diego County. [TWEET THIS]

If you or someone you know is struggling with addiction, there is help and resources at www.sandiegorxabusetaskforce.org. 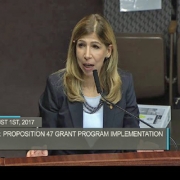 San Diego County District Attorney Summer Stephan announced that a $6 million grant will go toward services and programs designed to keep individuals from recycling through the criminal justice system in San Diego County.

The three-year grant was announced at a meeting of the Board of Supervisors on Tuesday where DA Stephan explained how the District Attorney Office’s is involved in the grant-funded programs.[TWEET THIS]

“Within the justice system, we see people who commit non-violent theft and drug crimes triggered by their struggle with mental illness and chemical addiction,” said District Attorney Summer Stephan.  “This grant will help give them a second chance to recover and can lower recidivism, contributing to a safer community. Some offenders under Proposition 47 are repeatedly cycling through the justice system. These programs provide access to treatment and housing through collaboration with our justice and community partners and address the underlying causes of their criminal conduct.”

San Diego County Health and Human Services as well as the District Attorney’s CARE Center will link individuals to community programs and services under the grant. In addition to substance abuse treatment, the programs will link people to mental and physical health services and offer supportive services to meet their needs.  These could include job training, education, a peer coach, transportation or help with getting a government ID card.  Those with housing needs will receive a housing assessment and the help of a housing navigator.  The project will offer rapid rehousing, a service approach that has been demonstrated to work for this population.

In North County misdemeanor court, for example, a team – including prosecutors and defense attorneys –will identify people convicted of or facing sentences for drug or property crimes, for which substance abuse appears to be a related factor.

“These individuals will be offered an in person meeting with a service provider stationed just steps away from the courtroom,” DA Stephan said.  “They will not need to make an appointment or travel to another location.  If they are ready, help will be available right away.” [TWEET THIS]